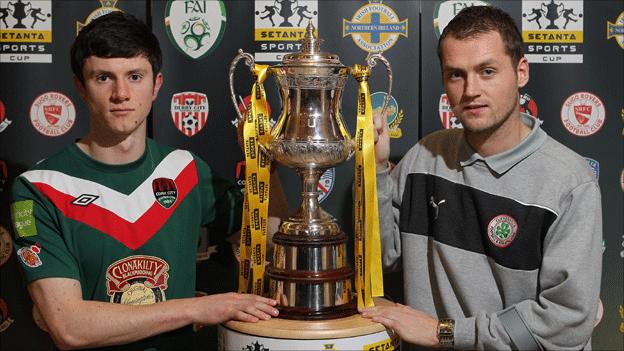 Irish Premiership leaders Cliftonville have been drawn to face Cork City in the first round of the 2013 Setanta Sports Cup.

The first leg will be played at Turner's Cross on 11 February, with the second leg at Solitude on 18 February.

Shamrock Rovers will play Coleraine, St Patrick's Athletic will take on Glentoran and Drogheda United will come up against Portadown.

The four seeded teams will enter the competition at the quarter-final stage.

All four Irish League sides will travel to face their League of Ireland counterparts in the first legs of their ties, before enjoying home advantage in the second legs.

Crusaders beat Derry City in a penalty shoot-out in the final of this year's Setanta Cup after the match ended 2-2 after extra-time.

The Crues have been seeded for a place in the last eight, along with FAI Cup winners Derry City, Premiership champions and Irish Cup winners Linfield and Premier Division champions Sligo Rovers.