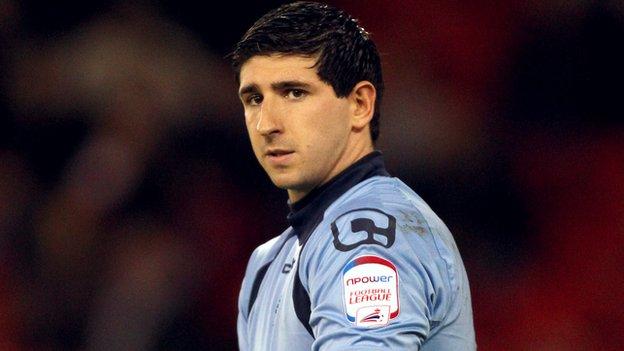 Crewe Alexandra keeper Alan Martin has signed a new 18-month deal with the League One club.

Martin, 23, has seized his chance after last season's number one Steve Phillips suffered a knee injury in pre-season.

Phillips made his first appearance of the season in last week's JP Trophy tie against Doncaster, but Martin was recalled for Saturday's league game.

Former Scotland Under-21 international Martin is now contracted to remain at Gresty Road until the summer of 2014.

Born in Glasgow, he began his career south of the border with Leeds before arriving at Crewe via Ayr United in the summer of 2011 and has kept five clean sheets in 21 appearances as a League One ever-present this season.

Phillips, who now also has a role as goalkeeping coach to Martin, had been pushing for a recall but he picked up a painful shin injury making a last-ditch save in the JPT northern section quarter-final win over Doncaster.

Meanwhile, one of Phillips' promotion-winning team-mates back in May, midfielder Ashley Westwood, has received praise for the way he has settled in following a £2m move to Aston Villa.

Signed during the final week of the August transfer window, the 22-year-old from Crewe was initially kept waiting by Villa boss Paul Lambert, but has impressed during Villa's mini revival over the last six matches

"I think a lot gets overlooked with Ashley," said Lambert. "But he has just come in here and taken to it no problem whatsoever.

"He was captain at Crewe and played a lot of games in men's football before he came here so he knew what it was about.

"I trust people to go and play, to go and give everything they've got and he has not let me down.

"If you look at his passing stats, they are terrific, something like a 91% success rate. He never gives the ball away. He's been exceptional."