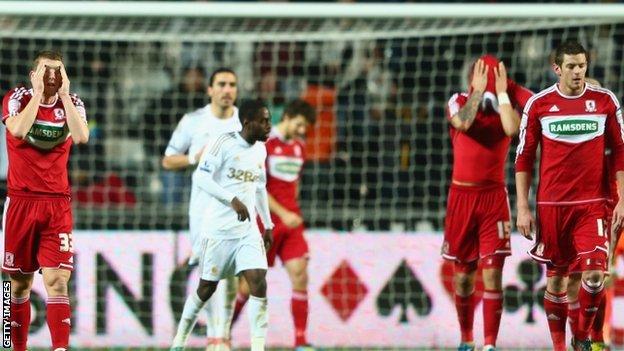 Swansea City have reached the semi-finals of the League Cup for the first time in their history after a Seb Hines own goal ended Middlesbrough's hopes.

Swansea gradually improved and Jonathan de Guzman's free-kick was tipped onto the bar by a fine Jason Steele save.

Hines then rose to head into his own net from a corner to send Swansea to their first League Cup semi-final.

The Championship visitors will feel they deserved better after coping comfortably with Swansea's attacks for the majority of the game.

And they came within inches of forcing the match into extra-time as Ishmael Miller's low cross evaded Scott McDonald at the far post.

"It's the sign of a good side if you don't play well but you win the game of football. Swansea wee nowhere near the team that beat the Arsenal at the Emirates, Their last two performances have not being convincing but they are still through to the last four."

No trophies are awarded to teams who finish in mid-table, he said, but cup competitions can open avenues to success for clubs adrift in the title race.

And after Arsenal's shock defeat to League Two side Bradford City 24 hours earlier, Swansea's prospects of ending a 100-year wait for one of England's major trophies now appear greater than ever.

This was no easy passage for the Swans, though. They lacked intensity and desire, and hardly looked likely to unlock a disciplined Boro defence.

The winning goal came after Swansea's only dominant period of the match, which began with the introduction of midfielder Ki Sung-Yeung.

Another substitute, Luke Moore, and Michu had shots blocked in the area as they finally exerted some pressure, before Steele produced a wonderful save to tip De Guzman's free-kick onto the bar.

A flurry of corners followed and the unfortunate Hines got his attempted header all wrong as he somehow managed to face his own goal while rising to challenge Garry Monk.

Middlesbrough manager Tony Mowbray was unashamedly honest in suggesting this tie was a distraction from the serious business of searching for promotion to the Premier League.

But there was nothing half-hearted about his side's performance. They almost caught Swansea cold after just 30 seconds when Leadbitter was denied by Chico Flores and then failed to make the most of the rebound.

Leadbitter then had the only other notable chances of a subdued first half.

His low drive forced Tremmel to save at full stretch but he then fired straight at the keeper from inside the area.

Those missed opportunities proved to be costly as Swansea finally stirred from their slumber in the final 20 minutes, and Hines' unfortunate intervention gave the visitors little time to find a response.