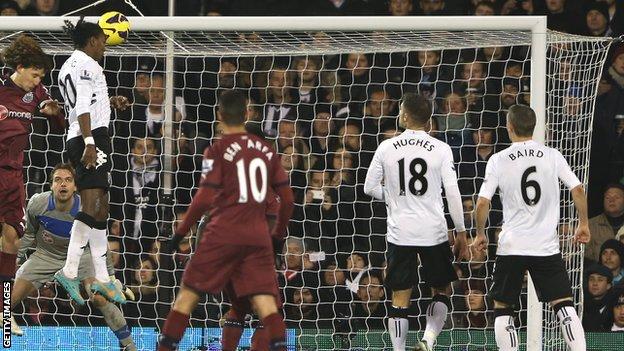 Fulham ended a run of seven matches without victory by claiming a hard-fought win over struggling Newcastle.

Steve Sidwell put the Cottagers ahead with a deflected shot - their first goal in over five hours of football.

But Hugo Rodallega's close-range header ensured the home side claimed a win that moves them three points ahead of United in the Premier League table.

Both these teams have reason to be disappointed with their season so far with Newcastle's injury and suspension-riddled campaign a shadow of their impressive previous one and Fulham's promising start to 2012-13 having tailed off dramatically in recent weeks.

It was no surprise then that this game was a closely-contested affair, with mistakes proving as decisive to the outcome as fluency and skill.

Fulham produced the greater amount of the latter and fewer of the former.

Damien Duff clearly had the bit between his teeth and was a regular threat to his ex-club with direct runs and accurate deliveries from either wing, while Dimitar Berbatov was typically intelligent in his movement and touch.

The Cottagers did not have it all their own way - particularly during a 20-minute spell either side of the Newcastle goal - but demonstrated an appetite for the cause that will assist their desire to rise up the table.

Newcastle boosted their flagging season with but seven days later it is clear they have much more work to do if the corner is to be turned.

It was another disjointed performance from Alan Pardew's side, who too often failed to get their most dangerous attacking players on the ball in areas where they could hurt the home side.

Demba Ba was isolated in attack, fellow striker Papiss Cisse - who scored 13 goals in 14 games for Newcastle last season but has only four in 20 this campaign - was wasted in a role that saw him operate largely on the right while Ben Arfa showed clear glimpses of his talent but is not yet up to speed after missing four games through injury.

They remain without an away win all season and still uncomfortably close to the relegation zone.

They were on the back foot from the off and deservedly fell behind when Sidwell's first-time shot from Duff's pass looped up off the knee of Mike Williamson and found the net via the underside of the crossbar.

They should have trailed by more at the break but twice Berbatov was foiled - the first time by a good save from Tim Krul after the striker had run clear of the defence and the second by a defender on the line from a close-range shot.

Newcastle were more of a threat after the break and levelled when Ben Arfa caught Schwarzer out with a shot from 25 yards that looped into the net off the toe of a defender.

However, Fulham battled back and reclaimed the lead when poor marking allowed Rodallega to head home unmarked from Duff's free-kick.

Both sides subsequently hit the woodwork - Fabricio Coloccini curling a shot against the post from range and Mladen Petric striking the corner of the goal-frame from 20 yards - but no further goals came to leave Fulham delighted and Newcastle crestfallen.

Fulham manager Martin Jol: "It was a vital win. If you lose this game you get in a depression and we didn't want that.

"It wasn't easy, although if you look at the chances we had we should have finished it off a lot earlier.

"I was happy that [Dimitar] Berbatov, after talking to him, could fill in that role [behind the striker]. It was vital, he didn't score so that was disappointing, but on the other hand he linked us up and kept the team together - I was very happy with him."