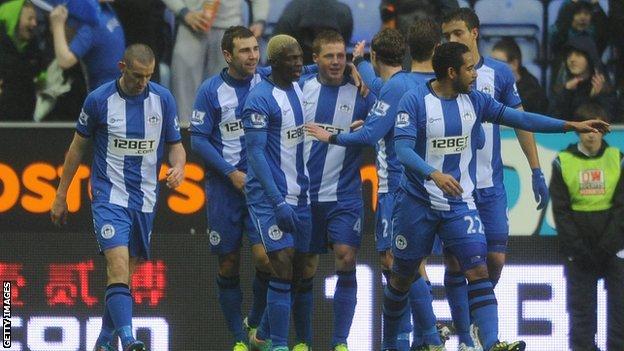 McCarthy fired the Latics ahead following a disputed corner, the Republic of Ireland international's shot deflecting off Jamie Mackie.

Redknapp has drawn all three games since taking charge of the Premier League's bottom club, who are still without a win after 16 games.

Swindon Town previously held the longest winless start and went on to be relegated in 1993-94.

A hard-earned point at Wigan is no mean feat particularly as West Ham United and Reading have both suffered defeat at the DW Stadium this season.

But Redknapp will have targeted three points from this game and knows time is against him, QPR are now eight points from safety with 22 games remaining.

Wigan could not have wished for a better start, McCarthy opening the scoring in the 19th minute moments after David Jones's clever free-kick from 20 yards had been tipped over by Robert Green.

Nigel AdderleyMatch of the Day commentator

"Mixed emotions for Queens Park Rangers, but Harry Redknapp knows his side must start winning soon if they are to climb away from trouble. Djibril Cisse's goal put them within sight of a first win this season only for poor defending to allow Wigan back in."

Republic of Ireland international McCarthy had not found the net since February 2011.

But the midfielder's beautifully struck first-time shot from just inside the area, after QPR had failed to deal with a disputed corner by Beausejour, gave Green no chance after taking a slight deflection off Mackie.

The visitors argued that the corner should not have been awarded, claiming that the ball came off a Latics player.

But their mood quickly changed when another corner led to Nelsen rewarding the hundreds of fans who made the long trek from London with a 26th-minute equaliser.

Roberto Martinez was without four defenders due to injury and suspension, but the Wigan manager will have been upset that Nelsen was allowed to head the ball beyond Ali Al Habsi after shrugging off his marker Adrian Lopez.

Quality was at a premium in a match played out in miserable conditions, Franco Di Santo's miss after Clint Hill's first-half mistake typical in what was an error-strewn contest.

Green produced fine saves to deny the busy McCarthy, Jones and Jordi Gomez before the latter struck the underside of the bar during a sustained spell of second-half Wigan pressure.

But the visitors took the lead against the run of play when substitute Cisse fired his side ahead 13 minutes after coming on.

But QPR's lead lasted less than three minutes, McCarthy firing through a sea of legs following Beausejour's delivery to deny Redknapp victory and QPR a first away win since November 2011.