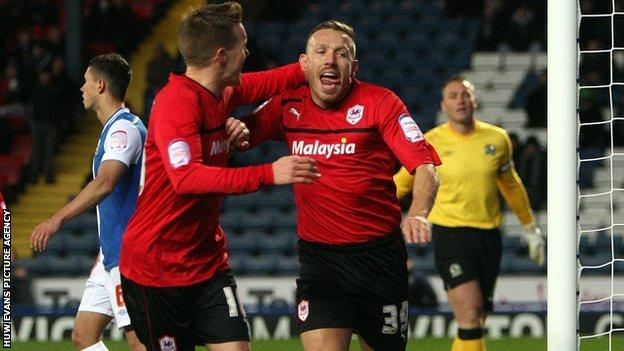 Cardiff moved four points clear at the top of the Championship with an emphatic win at Blackburn.

Mark Hudson headed City into a half-time lead, but Joshua King slotted under visiting keeper David Marshall to level just after the break.

Craig Bellamy, who earlier hit the crossbar, fired Cardiff ahead from six yards before Joe Mason latched on to a Heidar Helguson header to make it 3-1.

Substitute Kim Bo-Kyung capped a fine victory with the fourth from 18 yards.

The result leaves Blackburn still looking for a home win under new manager Henning Berg and the Rovers fans left in Ewood Park at the final whistle showed their dissatisfaction at the latest defeat with a chorus of boos.

The home team had started brightly with King having the first sight of goal but he was denied by the sliding challenge of Cardiff captain Hudson.

At the back, Blackburn looked equally comfortable with Martin Olsson brilliantly clearing when Craig Noone was poised to tap in Andrew Taylor's superb left-footed cross.

However, on the half hour, Cardiff took the lead with Hudson heading a Noone cross past Blackburn keeper Paul Robinson from six yards.

The goal came after a mini fracas in the centre circle which had been instigated by Jason Lowe's late tackle on Bellamy - Lowe was cautioned for his challenge but the Welsh winger appeared to strike the Rovers midfielder with an elbow as they fell to the floor.

Rovers' Argentina midfielder Formica was causing problems for the Bluebirds' defence with his probing runs but the visitors were generally in control of the match.

And it was Bellamy who went closest to doubling their lead before the break, latching on to a superb through ball but his left-foot shot rattled the crossbar with Robinson stranded.

Half-time boos from the home fans turned to cheers within five minutes of the restart as Colin Kazim-Richards, on as a substitute, controlled a Jordan Rhodes flick-on before releasing King who slotted the ball between Marshall's legs to equalise.

However, City were back in the lead within five minutes as Helguson's header put Bellamy through, and he fired a left-foot shot from six yards across Robinson to register his first goal at Ewood Park since leaving Rovers in 2006.

Blackburn should have equalised again when Dickson Etuhu's deflected shot brought a superb save from Marshall, and in the ensuing scramble Formica struck the top of the crossbar with an open goal at his mercy.

The miss proved costly as Rovers capitulated in the final 10 minutes.

In the 82nd-minute Mason chased his own flick on before firing low past Robinson, and within two minutes fellow substitute Kim Bo-Kyung fired a left footed shot in from 18 yards to round off a quick counter-attack.

That was the cue for Blackburn's unhappy fans to flood out of the gates and leave the hardy travelling supporters to celebrate a famous win.

Blackburn Rovers manager Henning Berg said: "We are disappointed to lose another game at home.

"We think Cardiff were the better team all over, although maybe not as much as the scoreline suggested but you can't have any complaints. They were more experienced than us, they had far better finishing and they also defended better than us - I think that was the key in this game.

"We were not happy with the way we defended - we can defend much better than we did and, also, the way we used the ball in the first half is a little bit of a way off where we want to be. We can play better than this."

Cardiff City manager Malky MacKay told BBC Radio Wales: "To come up here and play the way we've played tonight as well as getting the goals, we were clinical along with playing well tonight and I was delighted.

"We were in total control in the first half. They scored early in the second half and we had maybe five minutes when they had a bit of momentum, but after that again I thought we controlled the game and we were very clinical in our finishing."