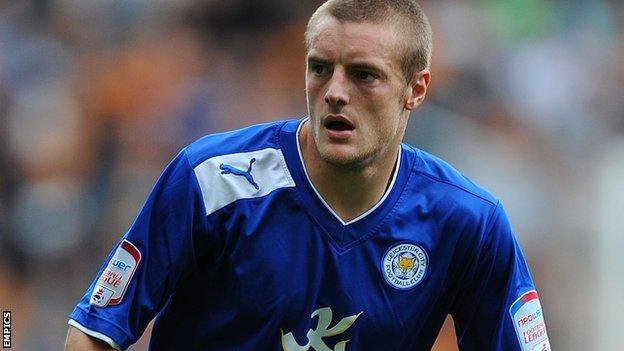 However, there was late drama as Vardy made it 2-2, striking from close range after good work from David Nugent.

This was only the second time Barnsley had scored more than one goal in a league game this season, although they remain the division's lowest scorers with 21 goals from 21 games.

Two minutes later, Steele again denied Waghorn before the hosts went ahead through Knockaert's fifth goal of the season.

But Stephen Dawson struck past Leicester goalkeeper Kasper Schmeichel from 12 yards to make it 1-1 after 27 minutes.

Noble-Lazarus's spectacular finish to give the visitors a shock lead came after a move involving Jim O'Brien.

Another Waghorn effort from distance was well held by Steele before Knockaert twice went close, first with a right-footed shot and then a headed chance.

Leicester substitute Vardy grabbed a dramatic equaliser with his first goal since the end of September to secure a point for the Foxes.

"We started the game very well, scored an early goal but conceded two really poor goals and we gave a side that hadn't been in the game something to hang on to.

"They came here to frustrate us and it was hard to break them down.

"For 90% of the second half we were camped in their half but they made the route to goal very blocked.

"They wasted time when they could but ultimately when we were on top we gifted them two goals and that's the biggest disappointment."

"It was very disappointing to concede the late equaliser but at the same time there was a sense of pride that we had taken a point against one of the best sides in the league.

"Leicester are a team I think can win the Championship, so it is a real positive to have earned something against them.

"We came here with a game plan to press them and be in their face. We knew we had to match them, and I thought we did.

"Our goalkeeper Luke Steele was incredible early on and then we scored the two goals that I felt were deserved."