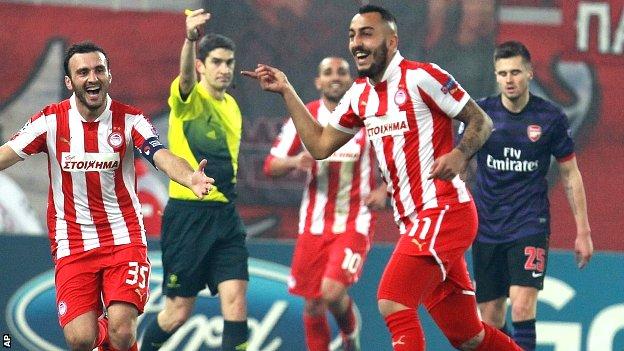 Arsenal's poor run of form continued as they wasted the chance to finish top of Champions League Group B with defeat by Olympiakos in Athens.

A Gunners side featuring seven changes started well and Tomas Rosicky slotted them ahead shortly before half-time.

But Olympiakos equalised through a close-range finish by Giannis Maniatis and took a deserved lead thanks to Kostas Mitroglou's curling strike.

Arsenal had already qualified for the last 16 but came second in the pool.

That means they could face the likes of Barcelona, Paris Saint-Germain or Borussia Dortmund in the last 16.

"The best team, by some distance, won tonight. Olympiakos out-passed this Arsenal side. Don't kid yourself: this was 2-1 going on 3-1 or 4-1. Arsenal's front four or six gave very little indeed. Arsene Wenger cut a frustrated figure and for most of the second half busied himself arguing with the officials on the touchline."

While they will be pleased to have reached the knockout stage for the 13th consecutive season, the Gunners have now won just four of their last 13 matches in all competitions.

Attention now turns to Saturday's visit of West Brom in the Premier League, where Arsenal sit 10th with only 21 points from 15 games.

This was the third time in four years they have lost at Olympiakos in their final group game, and the manner of their surrender should concern manager Arsene Wenger.

The Frenchman and his side complained bitterly about the award of a corner that led to the equaliser, but in truth an average Olympiakos team punished Arsenal for another poor defensive show.

It looked so different early on as the Gunners, away from their domestic troubles, played with a relative lack of pressure.

The alterations seemed to give Arsenal the freshness they needed and their 4-3-3 formation posed a reasonable attacking threat.

Gervinho, Chamakh and Alex Oxlade-Chamberlain all had early chances before Aaron Ramsey miscued from a fine position.

As is so often the problem, though, they looked vulnerable at the back - Thomas Vermaelen intercepted a Djamel Abdoun cross and Pablo Contreras saw a header cleared off the line by Rosicky.

It was a period of dominance for Olympiakos, but Arsenal held firm and then pushed forward again - and their reward arrived.

Gervinho advanced to the byline and played a pinpoint cut-back for Rosicky to clip an impressive first-time finish.

It was Rosicky's first goal since 6 March but would be the Czech's last contribution as he was replaced by Andrey Arshavin at half-time.

Arshavin missed two clear chances and that appeared to give the hosts and their noisy supporters renewed energy.

Then came the moment of controversy as Paulo Machado's header hit the post and went behind, only for a corner to be awarded for an apparent touch by the diving Wojciech Szczesny.

Following the resultant set-piece, Abdoun's centre was headed against Squillaci and fell to Maniatis, who forced the ball home.

Manager Leonardo Jardim replaced Abdoun with Mitroglou - scorer of - and with almost his first touch the striker curled a brilliant finish past Szczesny.

That would prove the winner as Arsenal failed to muster a response.