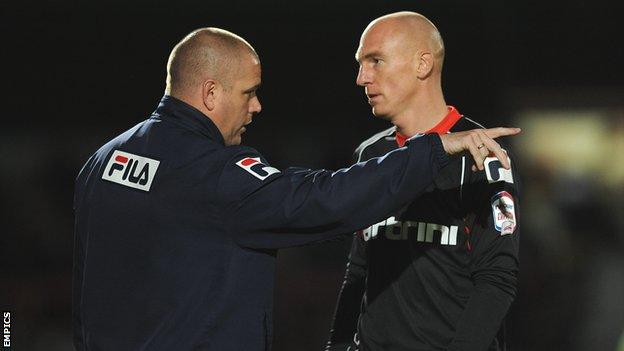 "I think he (Ellison) single-handedly won us the game and carried the whole team when we needed him," he said.

I'm happy for Kev that he's done the business, but we'll probably hear about it all week from him now

"It was a shocking team performance and I'm not happy. I can't enjoy it because I know we're capable of much more."

Bentley continued: "Our decision-making was poor and our passing at times was poor.

"Our preparation hasn't been great because of the travelling we've done in the last week, and there's been a bug knocking around the camp which ruled Andy Fleming out, so there are factors.

"I'm disappointed with our performance, but we'll take the three points and move on."

Ellison, 33, took his season's tally to eight goals with the second hat-trick of his Football League career.

The only time he had previously netted three times in the same game was for Chester at Grimsby in September 2008.

"I'm happy for Kev that he's done the business, but we'll probably hear about it all week from him now," added Bentley.