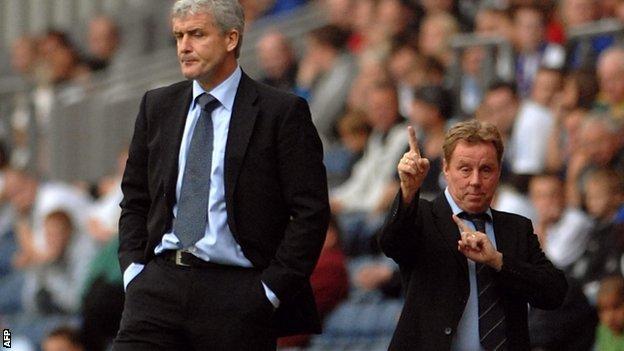 Harry Redknapp's golf clubs can go back in the bag. The biggest handicap he must deal with now is the one Mark Hughes has left behind at Queens Park Rangers.

Redknapp has used his deteriorating golf as a light-hearted vehicle to state his desire to return to the technical area following his surprise sacking by Tottenham Hotspur this summer after taking them to fourth place in the Premier League.

Now, after a spell as a Match of the Day pundit and a brief consultancy role at former club Bournemouth, he is back in business and walking into a familiar situation as he settles into his

When Redknapp, now 65, left Portsmouth to succeed Juande Ramos at Tottenham in October 2008, they were four points adrift at the bottom of the Premier League - an identical scenario which greets him at QPR.

Redknapp eventually guided Spurs to eighth place and into their first Champions League campaign less than two years later - a reflection of the remarkably swift renewal he brought to White Hart Lane.

QPR owner Tony Fernandes will not request such riches from Redknapp after finally losing patience with Hughes. He would almost certainly sign instantly for 17th place if it was on offer.

The club will also take confidence when recalling how, in December 2005, Redknapp returned for a second spell at Portsmouth after managing Southampton and engineered a remarkable escape to keep them in the Premier League at the end of the 2005-06 season.

Redknapp's continued unemployment cast a shadow over struggling Hughes in recent weeks and did so again during last Saturday's home defeat to Southampton; a result and performance that drew such fury from the home support and signalled the end to Hughes' miserable 11 months in charge.

Fans held up a banner reading "Harry Come And Save Us". Now they have their wish but their delight must be tempered by the fact that, on this season's evidence, QPR will take an awful lot of saving.

Redknapp's pride, understandably, was hurt by his dismissal from Spurs. He was only denied a second journey into the Champions League when Chelsea pulled off an unlikely triumph in the tournament by beating holders Barcelona in the semi-final, before winning on penalties against Bayern Munich in their own Allianz Arena.

The fates played a cruel trick on Spurs and Redknapp - and the man who was touted as favourite to succeed Fabio Capello as England coach before the position was handed to Roy Hodgson paid with his job.

Ukraine revealed a desire to appoint him as their national team coach, but the idea of Redknapp straying too far from his beloved family home on the south coast - especially as far as Kiev - was the unlikeliest of prospects.

West London and QPR represents an ideal fit. Redknapp can once more work in London with an owner in Fernandes who has demonstrated his willingness to be ambitious in funding his chosen manager.

Redknapp's proven man-management skills and knowledge will provide an instant lift to a team which looked without spirit and heart against Southampton at Loftus Road.

He must quickly unite his squad amid claims of a divide between the old guard and the new players who arrived en masse under the Hughes revolution last summer.

Redknapp will look to bring the best out of forward Junior Hoilett, who has yet to fulfil hopes QPR had for him after pulling off the coup of signing him from Blackburn amid fierce competition

And do not back against him trying to add one or two figures who are familiar to him when he attempts to add fresh impetus and solidity to his squad. Michael Dawson almost signed for QPR earlier this season - expect Redknapp to try again, probably with a greater chance of success than his predecessor Hughes.

Redknapp's vibrant personality will do much to sweep away the pall of gloom that has been hanging over QPR but his serious side will also be to the fore. He will know he has no time to lose if he is to succeed in his first mission of avoiding relegation.

He also has a knack of being able to mould various cosmopolitan influences within a dressing room and his handling of one of QPR's most gifted and unpredictable stars will be particularly intriguing.

Moroccan attacker Adel Taarabt was a player Redknapp famously described as "a bit of a fruitcake" after selling him to QPR for £1m when he was in charge at Spurs. He has since been handed the club's iconic number 10 jersey worn by idols such as Rodney Marsh and Stan Bowles, as well as signing a three-year extension to his contract in July.

Redknapp has shown public appreciation for Taarabt's gifts, saying: "He's got amazing ability. When he first came to Spurs they called him the next Zinedine Zidane. He isn't in the same league as Zidane. He was a genius but one day Taarabt could be up there because he's got that ability and could develop.

"He can play anywhere, he's got that much talent. It's just whether his head is right."

Redknapp must now decide whether Taarabt's maverick skills fit a relegation dogfight and if there is any place at all in his plans for such a gifted, but inconsistent, performer.

He will be a highly popular choice with QPR's fans who will see him as their saviour - although Hughes was greeted in much the same fashion when he arrived in January.

The first task is to bring order and stability to what has become a chaotic situation as a result of Hughes' decision to assemble virtually a new team after escaping relegation last season. Redknapp will regard this as the key to securing some desperately needed points over the next month until the transfer window opens in January.

Fernandes will be counting the cost of his expensive backing of Hughes but Redknapp is unlikely to have accepted the job without firm assurances that he can place his own indelible stamp on the squad he has inherited.

QPR's owner and his colleagues in the Loftus Road boardroom may find themselves required to sign a few more transfer cheques at the turn of the year, such has been the scale of the failures in the market under the previous regime.

The golf courses of the south may be poorer for Redknapp's absence but QPR will hope they have found their salvation.