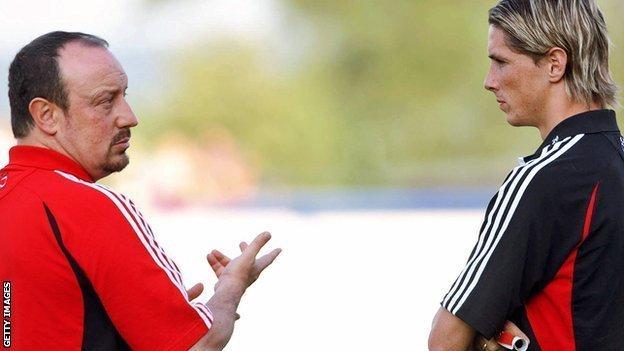 As soon as Rafael Benitez was named as interim Chelsea manager, the debate surrounding Fernando Torres began to escalate.

Some reports have suggested the Chelsea striker was behind the decision to appoint Benitez.

Torres scored 56 goals in 79 appearances under his former manager at Liverpool but has only managed 20 goals under five managers since Benitez left Anfield.

However, former Chelsea player Pat Nevin says that Benitez can't rely on turning Torres's career around. "He'd better have a plan B in place" he said.

Benitez was responsible for bringing Torres to England, when he signed him from Atletico Madrid in 2007.

So will their reunion at Stamford Bridge be the psychological boost Torres needs to improve his form?

Pat Nevin explains his thoughts on the Torres dilemma.

Why was Torres so good at Liverpool?

"He was young and the team was set up for him perfectly. The manager played the system that absolutely suited him and played towards him.

"A lot of people talk about the fact that he had Steven Gerrard providing him with opportunities but there was also Xabi Alonso, who was a great passer, and Yossi Benayoun who was fantastic at finding him as well. So everything seemed to be playing to his strengths.

"Also he was pretty new on the scene and when you're new it's easier because people don't know your strengths and weaknesses so you can usually make a killing on that.

"But there was more than that - he was fully fit. Since then he's had major injuries and they usually have a negative effect."

What has been the difference at Chelsea?

"A few times recently he's played on his own up front, against two or three defenders. A lot of teams now play with two sitting midfielders in front of the centre-backs so there's much less space to play into. Also, his confidence isn't as high as it was before.

"If Rafa comes in and he wants to change it all by purely expecting to get the very best out of Fernando Torres he'd better be careful because that may or may not work. He'd better have a plan B in place because if it doesn't work and he doesn't get another striker in he might have problems."

Does the Chelsea system work for Torres?

"Chelsea are now playing a system that should be absolutely perfect for Fernando Torres.

"They are playing three creative players behind him and Mata plays fantastic through balls, as good as anybody else at the moment. He's playing with a group of players this season that is absolutely made for him.

"Chelsea didn't have that type of team last year. They were a slightly more one-dimensional side. It was a power play aimed towards Didier Drogba and Torres had to live off the scraps - that's not really his game.

"But the system that Chelsea have set up since the start of this season is perfectly suited to Torres.

"Maybe it hasn't worked recently because he's the only striker and he's run out of gas. You just don't know until he gets some rest, comes back and maybe that strength will come back.

"Everything Chelsea try to do is through the 'D'. That is the way Barcelona play and that is obviously the template for Chelsea. But they are trying to do it in a six-month period. If it was that simple, people would have done it a long time ago.

"It may be the right way but it takes a little while for these things to work. Chelsea have probably got enough decent players in that creative forward area. But it seems that they only have one man who can play at the top of it for the whole season - when it works it's great, when it doesn't suddenly it's all Torres's fault."

What can Benitez do to help Torres?

"At his best his goals were usually a ball played between two defenders that he runs on to, behind a defence that's got 25-30 yards behind.

"But teams defend deep against Chelsea so you tend to find him running wide, and over-trying to get involved in the game because he's not getting enough touches.

"Benitez will inherit his former Liverpool striker Fernando Torres, increasingly looking lost and lonely as he tries in vain to rediscover the magic he displayed to such significant effect under his fellow countryman on so many occasions at Anfield.

"Benitez stated only recently that Torres's decline was simply a matter of lost confidence. He can now put his theory to the test - and if he is proved correct it may yet be a path to the sort of longer-term deal he eventually wants at Chelsea."

"It might be a good idea for Benitez to say to him: 'just do your work between the sticks, don't chase out wide, leave some of your energy for when you need it'. It's a pretty old-fashioned concept but might have some success.

"On the training ground he has to make sure others know where he needs the opportunities and Torres needs to make sure that he doesn't waste energy going into the wrong places.

"It's also important to give him a rest now and again. When he sees the sharpness wane, he shouldn't leave him out there running about, beginning to look poor when the fans are getting a bit miffed and the journalists are enjoying giving him abuse. He should take him off and get him back in when he's fit and sharp.

"If Benitez actually figures out an answer to the conundrum of Fernando Torres the benefits could be spectacular - but he's got very little time to do it."