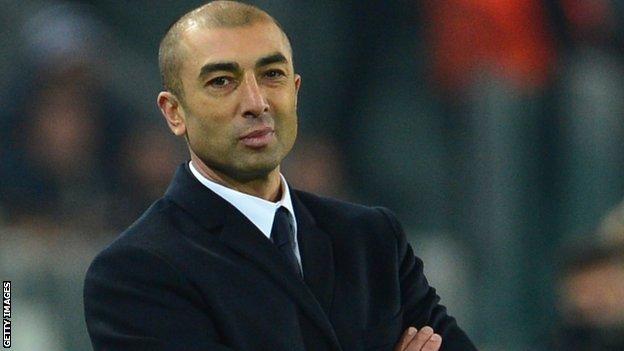 Manager Roberto Di Matteo has been sacked by Chelsea after just eight months in charge.

Di Matteo won the Champions League and FA Cup as caretaker manager last season and was given a two-year deal in June.

But in the wake of the 3-0 defeat to Juventus, which has left the Blues on the brink of a Champions League exit, he has left Stamford Bridge.

"The club will be making an announcement shortly regarding a new first-team manager," a statement said.

Owner Roman Abramovich, who is looking for a ninth manager since taking over at Stamford Bridge in 2003, is known to be a long-term admirer of former Barcelona coach Pep Guardiola.

However it is not known whether Guardiola is willing to end his sabbatical from football and Abramovich has made contact with former Liverpool manager Rafael Benítez to gauge his interest in taking charge on a short-term basis.

The club's Russian benefactor made contact with Benitez before Tuesday's defeat in Italy as he assessed his options.

After an impressive start to the season, the Blues have won two of their last eight games.

They sit third in the Premier League table, four points behind leaders Manchester City, who they host at Stamford Bridge on Sunday.

Even by Chelsea owner Roman Abramovic's sky-high standards, the sacking of Roberto Di Matteo is ruthless. This is the manager who won the Champions League and FA Cup in May. Chelsea's statement claims results and performances have not been good enough - and yet only a month ago they were top of the Premier League after an outstanding 4-2 win at Spurs. The decision makes it even more abundantly clear that Di Matteo was only keeping the seat warm for the first love of Abramovich's footballing life, former Barcelona coach Pep Guardiola. Will he ever be able to lure him to a club for which managerial instability is a way of life?

Chelsea could become the first Champions League holders to exit at the group stage of the competition.

The club statement continued: "The team's recent performances and results have not been good enough and the owner and the board felt that a change was necessary now to keep the club moving in the right direction as we head into a vitally important part of the season.

"The club faces a difficult task ahead in qualifying for the knockout stages of the UEFA Champions League as well as maintaining a strong challenge for the top of the Premier League while competing in three other cup competitions.

"Our aim is to remain as competitive as possible and challenge strongly on all fronts."

Di Matteo took full responsibility for the defeat in Turin, which means Chelsea will be knocked out if Juve draw away to Shakhtar Donetsk on 5 December.

He said: "If anyone has to take blame, it's me. I selected a team I was convinced would win or at least draw."

When asked whether he needed a vote of confidence from the club's owners he added: "No, I don't need that. The fact they put trust in me in the summer, that's enough for me."

The ex-midfielder won the FA Cup twice and made 175 appearances for the Blues between 1996 and 2002, and took over as boss in the wake of Chelsea's 3-1 defeat to Napoli in the first leg of their Champions League last-16 tie.

But they overturned that deficit with a 4-1 win at Stamford Bridge and secured a 2-2 draw at Barcelona in the semi-final second leg despite having John Terry sent off in the first half at the Nou Camp.

After beating Liverpool 2-1 in the FA Cup final, they beat Bayern Munich in a dramatic penalty shoot-out in the Champions League final.

They finished sixth in the Premier League and Abramovich waited until June to give Di Matteo the job on a permanent basis.

And after the arrivals of Eden Hazard,Oscar and Victor Moses, they suffered just one defeat in their opening 12 matches before the recent downturn.

Although Chelsea enjoyed an impressive opening to the campaign, Di Matteo faced constant questions about Terry, who was banned for four matches and fined £220,000 by the Football Association for racially abusing QPR defender Anton Ferdinand last October.

There was further controversy when the Blues accused Clattenburg of using inappropriate language towards midfielder John Obi Mikel in their 3-2 home defeat by Manchester United in October.

Benitez, 52, has been out of work since he was sacked by Inter Milan in December 2010 after just six months in charge.

The Spaniard left Valencia to join Liverpool in 2004 and won the Champions League in 2005, as well as reaching the final in 2007, before leaving Anfield by mutual consent in 2010.

Newcastle manager Alan Pardew, who has an eight-year contract, is surprised by Di Matteo's departure.

"I'm astonished really," he said. "It just goes to show you how precarious we are as Premier League managers and we can't take anything for granted.

"As far as I'm concerned he's done nothing absolutely wrong. The philosophy was to perhaps change the look of the team which he's tried to do and that doesn't happen overnight.

"He's won two competitions in less than a year so it's unbelievable."