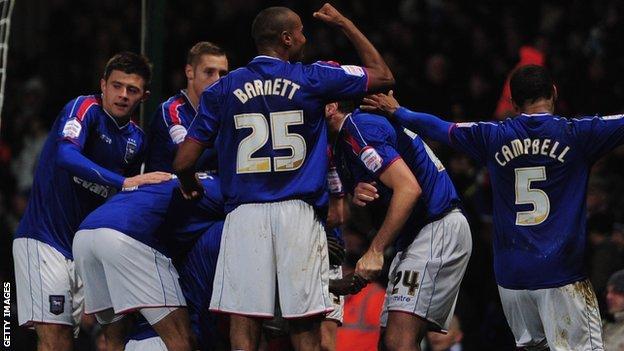 Ipswich Town moved out of the bottom three in the Championship with a comfortable win over Nottingham Forest.

Guirane N'Daw took advantage of a Forest defensive mix-up to take the lead but Dexter Blackstock squeezed in an equaliser.

Luke Hyam netted the rebound from DJ Campbell's penalty which had been saved by Camp, following a foul on Campbell by Danny Collins in the area.

Substitute Daryl Murphy slotted in the hosts' third to seal the win late on.

Ipswich have now won three of the six games since Mick McCarthy took charge at the start of November, having only won two all season before then

Prior to kick-off, Forest were only one place out of the play-offs on goal difference, but the defeat saw them move down to ninth in the table.

Tommy Smith wasted an early chance for Mick McCarthy's side when he headed a Lee Martin cross straight at Lee Camp.

The Forest keeper seemed fortunate to stay on the pitch shortly afterwards, taking down DJ Campbell but only earning a yellow card from referee Andy D'Urso.

However, Camp was partly to blame for Ipswich's opening goal, becoming involved in a mix-up with Collins that allowed N'Daw in to score.

Sharp hit the bar before half-time, and 13 minutes after the resumption Forest were level when Blackstock tapped home Sharp's cross.

Ipswich were ahead again three minutes later following a foul on Campbell by Collins in the area. Campbell's penalty was saved by Camp but Hyam pounced on the rebound to regain Ipswich's lead.

Forest could not hit back and in the final minute of normal time Murphy broke free before slotting home past Camp to give the home side a much-needed three points that combined with results elsewhere moved them out of the relegation zone.

Ipswich Town manager Mick McCarthy: "Unless I've woken up and it's 4 May, I'm not bothered.

"We'll all get a kick from seeing it but we've got tough games coming up, so we've got to maintain that level of performance and make sure we stay out of it.

"I enjoyed it and we played well, but now we've got to play like that every week."

Nottingham Forest manager Sean O'Driscoll: "I was going to make a change after 20 minutes, but that's probably a bit too radical.

"I could have brought anyone on. I just needed to change things. I wanted to change the formation but, to be fair to them, they've been on a great run and we got a great result at Wolves on Saturday.

"But in this league, if you get one win everyone thinks they're superstars. If you don't put the hard work in, that's the kind of performance you get and get well and truly beaten.

"You can never take anything for granted in this league. It baffles me and I'm not happy. There were mistakes all over the pitch, in every area."