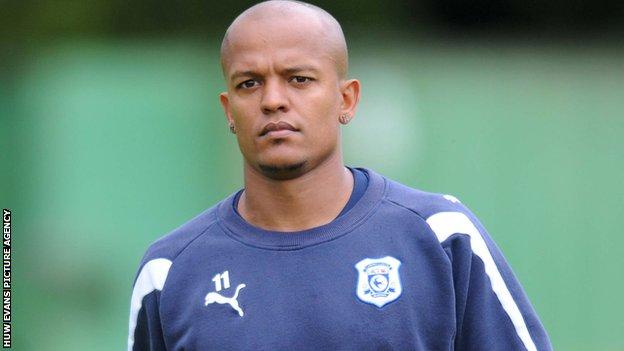 Earnshaw joined Israeli side Maccabi Tel Aviv on loan in September until the end of the season.

The 58-times capped Welsh international has revealed he has been training with missiles being destroyed overhead by Israel's Iron Dome missile shield.

"It's missiles in the city and that is scary," said Earnshaw.

More than 100 people have died in the Gaza Strip in six days of violence, Hamas officials say, with talks over a ceasefire ongoing to prevent more bloodshed.

Hamas militants fired more than 100 rockets at Israel on Monday. Three Israelis have also died as a result of rocket attacks.

We were training, just about to start training and we saw the interceptors... go directly in the sky. It was literally... right above us and they sort of blew up in mid-air

Earnshaw gives a revealing insight into life in Israel during the current bombardment.

His two-year-old son and his sister were on holiday with him when the air strikes on Tel Aviv began. They have now returned to the UK.

He revealed he had to flee his car as he made his way to watch his side's away tie with local rivals Bnei Yehuda.

"They say virtually every missile thrown into Tel Aviv is intercepted, but there is always that chance one or two might come through or whatever," added Earnshaw.

The 31-year-old in July 2011 on a two-year deal after coming out of contract at Nottingham Forest.

But Earnshaw had fallen down the pecking order at the Cardiff City Stadium by the start of this season.

Cardiff have a number of attacking options, having recruited the likes of Craig Bellamy, Craig Noone, Heidar Helguson and Nicky Maynard.

Earnshaw decided he wanted to play football and went out on loan and has ended up playing in Israel.

But now he finds himself living and working in a country which is caught up in a conflict.

"I have heard them and seen them (missiles)," said Earnshaw.

"We were training, just about to start training and we saw the interceptors - because you don't know where the rockets are launched from - go directly in the sky.

"It was literally right above us and they sort of blew up in mid-air.

"That was a bit crazy because you could actually see it explode and then 10 to 15 seconds later you hear the sound and the big bang."

Earnshaw, who is currently out injured with a hamstring strain, has a bunker in his apartment and admits he had has to run for shelter during the violence.

On Saturday Maccabi lost 1-0 at Beni Yehuda despite a raid taking place just 45 minutes before kick-off, with the 7,000 supporters who attended the game given emergency instructions.

Earnshaw admits fearing for his safety, but he is also enjoying his football in Tel Aviv and is determined to stay there for the meantime.

"It is a bit strange for everyone to have this in Tel Aviv because it never happens here," said Earnshaw.

"It is a hard one because the football has been good.

"Everything is good, we are top of the league, and the team has been doing very well.

"I am hoping this will get better and back to normal, but we will see what happens."