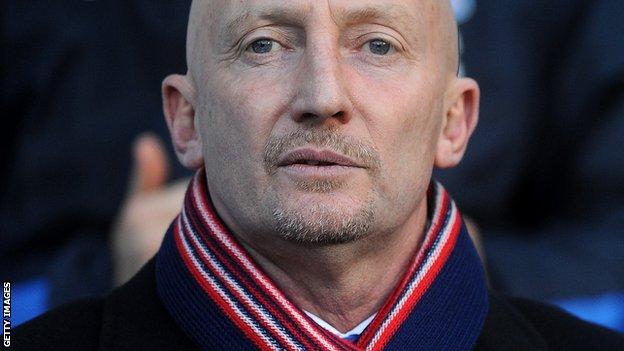 Defender Ian Evatt has been critical of Ian Holloway's training methods during the final weeks of his three-and-a-half year reign at Blackpool.

Holloway left the Seasiders on 3 November to

In the last couple of months, we hadn't really done much training. We had numerous days off - anything from two to five or six at a time

"In the last couple of months, we hadn't really done much training. We had numerous days off - anything from two to five or six at a time," he said.

"It was as surprising to the lads as anyone else. We're an honest bunch of players and we want to work hard, but at times we weren't doing that. Maybe that's why we had the bad spell that we had.

"We've knuckled down now. Training has been fantastic in the last 10 days or so.

"The training has been hard work but we've needed it. We're doing things that we haven't done for a long time, especially working on things defensively.

"For whatever reason, the old manager didn't really work on defensive stuff. It was all attacking work.

"The lads are getting fitter and stronger. It's onwards and upwards now and hopefully now we'll start climbing the league."

Holloway, 49, presided over one of the most successful periods of Blackpool's recent history, winning promotion to the Premier League in 2010 and reaching the Championship play-off final last season.

But he said he after replacing Dougie Freedman at Palace, and left Bloomfield Road having won only two of his last 10 games at the helm.

The Bristolian watched his new team beat Blackburn at Selhurst Park on the day of his appointment and since then has won all three of his games in charge to take Palace two points clear at the top of the Championship.

"I think it's the best we've played away from home for a long time," added the 31-year-old centre-back.

"We looked very solid and they didn't look like scoring, but the ref's given a penalty from nowhere and it would have been a travesty if we had lost that game.

"We've shown good character to come back, especially going 1-0 behind so late. There are a lot of positives to take."