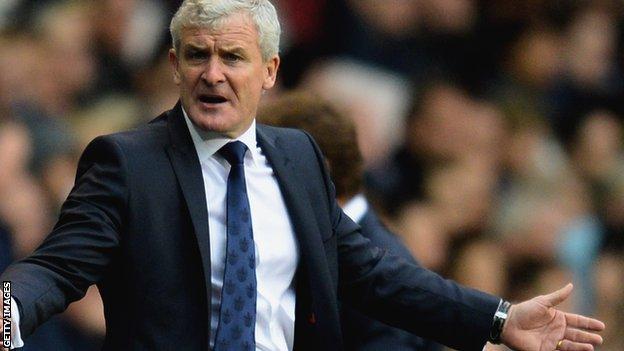 QPR have sacked manager Mark Hughes after 10 months in charge with the club bottom of the Premier League.

"The circumstances we find ourselves in have left the board of directors with very little choice but to make a change," read a club statement.

Former Tottenham boss Harry Redknapp is favourite to take over at Loftus Road.

But Redknapp told BBC Sport fans would have to "wait and see" if he is the new boss, adding that he had received no personal contact from QPR.

The club said they are "working actively to put a new managerial structure in place as soon as possible".

"This time last week QPR owner Tony Fernandes was Tweeting 'for the one millionth time' that manager Mark Hughes would not be sacked.

"Fernandes has been a constant shield for the man he appointed in January - but eventually there was no protection for Hughes from the sort of results he had overseen.

"It will be a personal blow to Fernandes after investing so much personally and financially in Hughes but failure to record a single Premier League win this season has forced him to push the button.

"The arrival of Harry Redknapp looks a formality - but what will he make of the assortment of hired hands assembled by Hughes during a chaotic summer at Loftus Road?"

Hughes's final match in charge was

"This decision has been taken after careful consideration by the board of directors, following numerous meetings over the last few days," the statement added.

"The board of directors wish to thank Mark for his commitment, hard work and dedication in his 10 months in charge.

"Mark has shown integrity and professionalism throughout his time."

The Hoops only managed to preserve their Premier League status on the final day of last season. After securing survival in May Hughes said: "There is no way we will be in this situation again in my time here."

But, despite a massive overhaul during the summer, the team have continued to struggle.

But the poor form continued and Hughes, 49, led his side to just four points from their opening 12 games, including eight defeats.

Hughes: from striker to manager

QPR chairman Tony Fernandes had continually backed Hughes but has finally run out of patience with the former Wales, Blackburn and Manchester City boss.

The Malaysian entrepreneur agreed after the Welshman

Former QPR winger Richard Langley, who spent eight years at the club across two spells, told BBC Radio 5 live's Victoria Derbyshire: "The frustration has been brewing, but the main thing is he has had such a talented squad but results have not been coming.

"It is difficult to understand why they have not won. But, for me, the most outstanding thing is that they have not been playing as a team. There seems to have been little fire from the manager."

Redknapp, refused to be drawn when asked on Saturday's edition of Match of the Day about the possibility of replacing Hughes.

The 65-year-old took over at Tottenham in October 2008 when, like QPR now, they were bottom of the Premier League.

He led them on their first Champions League campaign in 2010-11 and achieved a fourth-place finish in his final season in charge.

Redknapp returned to League One side Bournemouth, the team he managed for nine years from 1983 to 1992, in an advisory capacity in September but it is thought he is no longer at the club.