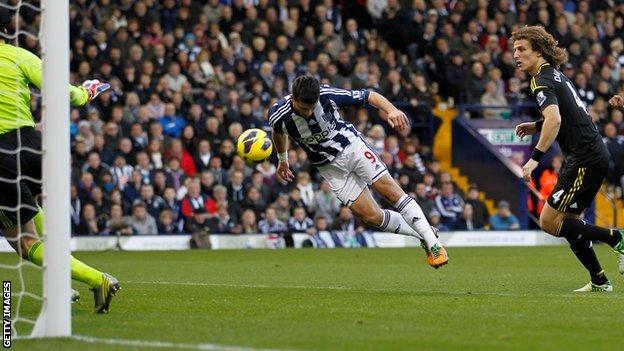 Fernando Torres trudged off 28 minutes from the end of another frustrating afternoon, just when Chelsea were desperately chasing salvation and in dire need of a goal.

The fact manager Roberto Di Matteo chose to chase without his £50m centre-forward speaks volumes about the Spaniard's contribution.

While Long was dangerous, direct and devilish throughout, Torres was a fringe participant who once again flattered to deceive.

This season there have still been flashes of the brilliance which terrorised Premier League defences up and down the country during his devastating three-and-a-half-year spell at Liverpool.

The Spaniard scored 65 goals in 91 Premier League starts for Liverpool but has only managed 11 in 40 for Chelsea.

But the consistency and supreme confidence seem to have vanished and the "fit" at Stamford Bridge somehow remains not quite right despite Didier Drogba's exit and a sustained run in the team.

Even the club's fans, who are desperate to see "Red Fernando" return, seem to be losing faith it will happen. Their support remains, but it's increasingly in hope rather than expectation.

Torres has actually outscored Long this season with seven goals in 19 Chelsea appearances (including his Community Shield strike against Manchester City). Long has "only" managed six in his 14 club games.

But the stats fail to tell the whole truth. Torres and Long were employed in the same role on Saturday, but were miles apart in terms of performance.

Baggies fans know they have the real deal in the pacy Irishman, who played despite the death of his grandmother earlier in the week.

And so does their manager and Chelsea legend Steve Clarke. "I've run out of words to describe his performances this season," said Clarke, who spent 15 years at Chelsea as a player and coach.

"Shane produced another fantastic performance in what has been a difficult week for him."

Long revealed a T-shirt which said 'Rest In Peace Nan' after opening the scoring.

I've run out of words to describe his performances this season

Clarke added: "He wanted to play. He is going back to Ireland to be with his family for the next two or three days."

The 25-year-old, a £6.5m signing from Reading in 2011, dealt with his personal grief by giving the complete centre-forward's display.

He teased and tormented England centre-half Gary Cahill from the first whistle, he hassled Cahill and David Luiz throughout and linked play superbly - and there was also an end product.

As well as his fine headed opener, Long teed up the winner for Peter Odemwingie with a stunning cross. And, as Match of The Day pundit Harry Redknapp so brilliantly put it on Saturday night, was a "pest" in a tireless performance.

At his peak, Torres was the epitome of a pest of a striker with the quality to match. Such is the 28-year-old's class that it's almost inconceivable to think his best days are gone.

But for the moment at least, he appears to have lost his edge, and he might not get the chance to prove his worth and regain former glories with Chelsea.

Daniel Sturridge looked twice as threatening when he moved to centre-forward after Torres' departure even though he wasted one glorious chance and was denied by some smart goalkeeping on two other occasions.

The introduction of Chelsea's key man Juan Mata and fellow creative dynamo Oscar certainly explains their improvement in the latter stages and sudden ability to create chances. How Torres could have done with them on the pitch for the first hour.

"He's a real pest. He never stops working and his movement is top class. He never stops and you will never have an easy game with Shane Long; he will always give you problems. He came off to a standing ovation and he deserved that. His performance was excellent."

Chelsea are also consistently being linked with another world-class striker in Colombian Falcao - the Atletico Madrid forward who tore Chelsea to shreds in the Super Cup in August.

Torres was publicly backed by the Blues hierarchy by way of chief executive Ron Gourlay at the end of a troubled season in May.

But for how long will Chelsea stick by the Spaniard - even if the whispers around the club continue to suggest that owner Roman Abramovich expects his star turn to play?

Di Matteo has also said he will have to look at curbing his side's attacking instincts and change the system in order to get this season back on track after a fourth league game without a victory.

"Maybe we need to sacrifice a little bit the attacking options to go a little bit more defensive," the former Baggies boss said.

"Maybe it's a time where we might have to change things a little bit in terms of selection and the way we play.

"We had a lot of joy and long term that is the way we want to go but we need to get a couple of positive results to get our confidence high again."

Hardly the news the fragile Torres wishes to hear.

Meanwhile West Brom have now won six from seven at home, are fourth in the table, in the Champions League places, and just a point behind European Champions Chelsea.

Their main man up front has been pivotal to that run. A buzzing Hawthorns hopes that Long may it continue.