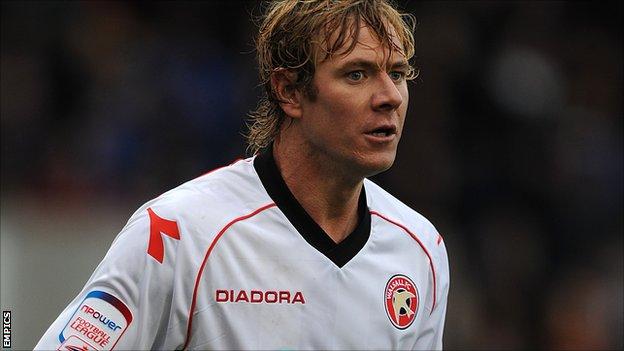 Walsall were held to a draw by League One bottom side Hartlepool United, despite dominating for much of the game.

The hosts had the best of the first-half chances, but Evan Horwood gave Pools the lead from the penalty spot.

Dean Holden equalised for Walsall from close in after the break, and only inspired goalkeeping from Scott Flinders denied the Saddlers a second.

Pools are without success in 19 games, while Walsall are now 14 without a win.

"I'm a little bit hoarse, but that's because I'm shouting fundamentals to the players, things that should be a given on a football pitch, but it's my job to educate them.

"They're galvanised and there's certainly an improvement, there's still 20-plus games to go.

"We rode our luck at times, but I'm delighted with the effort and the commitment they put in and we picked up a point. We have to be solid, hard-working and resolute and we were. "