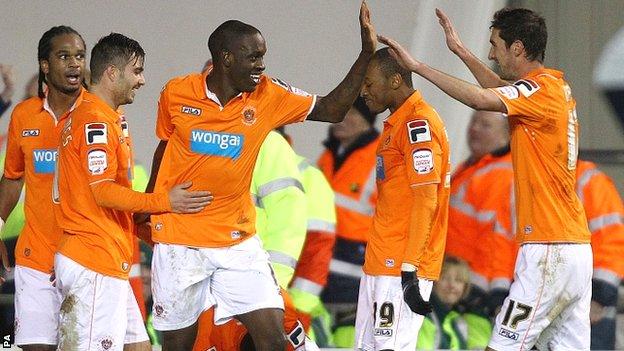 Blackpool fought back from two goals down to salvage a point against Watford at Bloomfield Road in the Championship.

The Hornets led 2-0 after 21 minutes as Matej Vydra set up Ikechi Anya to to score from close range and Troy Deeney turned in a Mark Yeates cross.

Blackpool improved after the break and 39-year-old Kevin Phillips brought them back into the match with a neat finish after good work from Chris Basham.

Michael Appleton has now presided over three score draws since replacing Ian Holloway as Blackpool boss, but the Tangerines have won only one of their last nine matches.

They were disappointing in the opening period and were soon behind as Vydra's endeavours allowed Anya to convert from six yards and Yeates found Deeney to double Watford's advantage.

But the hosts began to find their rhythm after the break, Nathan Delfouneso forcing a save from Watford goalkeeper Manuel Almunia.

Phillips was soon on hand to score against one of his former clubs, his second goal of the season.

Ince rattled the woodwork from 12 yards, while at the other end Blackpool keeper Matt Gilks needed to keep out a Nathaniel Chalobah effort from 30 yards.

Wes Thomas saw a header superbly saved by Almunia and time appeared to have beaten the home side, but in the closing stages Ince found Osbourne to equalise and Ince might have won it, only to shoot wide from 20 yards.

Blackpool boss Michael Appleton: "We didn't do enough in the first half and maybe we switched off for both of Watford's goals.

"In the second half I thought we looked comfortable and created enough chances to have won the game.

"I think we restricted Watford to having just three scoring opportunities throughout but despite that we have still only managed to get a point."

Watford manager Gianfranco Zola: "I am disappointed in a way because I thought at half-time the game was won.

"But Blackpool played better than us in the second half and created a lot of chances so it was probably a fair result.

"In general it was a good result for us because it is not an easy place to come.

"I knew it would be difficult in the second half but I was expecting my team to perform better than we did.

"We couldn't hold the ball and we kept giving it away and that was the difference between drawing the game and getting three points.