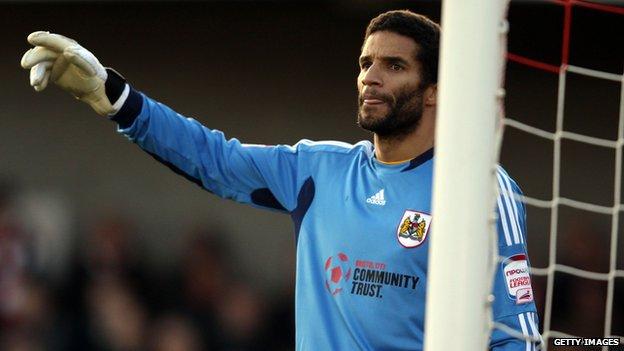 It is a bracing November morning on the south coast and David James is the last man on the training field.

A group of schoolboys wait by the gates in anticipation of an autograph and a chat. The steam rises from his goalkeeping kit as he stops to oblige, a small tuft of grass in his hair having spent the past two-and-a-half hours proving clear evidence that perhaps life really can begin at 40.

I feel rejuvenated. I haven't had this much fun for many a year

The former England goalkeeper is a millionaire many times over. He has played for Liverpool, Manchester City, Aston Villa, West Ham and Portsmouth. He has played for his country 53 times and lifted the FA Cup. And yet, here he is with League One AFC Bournemouth, buzzing.

The thermometer hasn't risen above five degrees but a smile breaks out across James' face as he describes this as 'T-shirt weather'. But why is he here?

"I love playing football," he tells BBC Sport. "I feel almost rejuvenated being here. Eddie [Howe - AFC Bournemouth manager] is a wonderful guy and a very, very good manager. And we have a group of players who are enthusiastic to say the least. It is cliched but it is a good changing room to be in."

His four seasons at Fratton Park encompassed an FA Cup triumph, four managers, three owners, a transfer embargo and the recurring fiasco over staff not being paid on time. The 2010 World Cup experience ended in humiliation by Germany, a move to Bristol City followed and in May this season he was released.

James might have accepted it was time to hang up the gloves but he asked to train with Exeter City, before joining Bournemouth in September.

At the club's new training ground, next to their Dean Court stadium, James buzzes with energy as he throws himself around like a man half his age. There is obvious, and audible, disgust every time a shot beats him. Screams of "aarrghh Jamo" fill the air. The passion remains, as does a clear determination to continue.

"I haven't had this much fun for many a year. It is environmental. If you come into a nice workplace it spawns enthusiasm. The manager is very clear in his decisions and it makes things a lot easier for the players to come into."

John Burridge played for Manchester City at the age of 43 and James clearly feels that is another landmark that is with his grasp. "How long can I go on for? I'll keep working, keep the same methods going and try to improve incrementally. Where is the limit?"

James has always been clear in his desire to become a manager when his playing career finally comes to an end. But, for now that has changed.

"That has been put on hold," James adds. "The enjoyment and enthusiasm I have here, the opportunity to get promotion, which I have never done.

"If that happens then there is an opportunity to do it again the following season. I am enjoying it and I have always said if I am enjoying it, I am physically capable and someone wants me to play, then I will continue."

If Burridge was regarded as a comic figure, not least by himself, well before he reached his forties, James is serious about his game. He has no intention of living up to the "Calamity James" tag that he worked so hard to erase during a career that spanned 573 Premier League appearances, second only to Ryan Giggs.

"I have got a bit of stick off Twitter but physically I am in better shape than I have been for two or three years, through not fault of anyone else but my own," James adds. "It is all just part of this enthusiasm of I have got being here and long may it continue."

Like James, Burridge was regarded as an eccentric of the goalkeeping fraternity, but eccentricity takes different forms. James enjoys his reputation for talking and thinking rather differently from your average footballer. His thoughts on racism in the game are an example. Does English football have a problem with race?

"No, not at all," he says. "There is always going to be potential to highlight things but I genuinely think that if you look at the actual numbers of reported incidents, even when it is gone beyond someone saying they heard something, it is less than a handful in 18 months. That is credit to campaigns like Kick It Out.

"The game is under an ever increasing microscope, so incidents like the are going to become big news, when a few years they wouldn't have been mentioned and arguably didn't need to be mentioned in the first place. Football is not as bad as people are painting it out to be.

"The game is hardly comparable to 18 to 20 years ago when I first started. I was subject to racism in the early days. Now it's ageism. I don't know why."

Rarely has the adage that you're only as old you feel been as fitting.