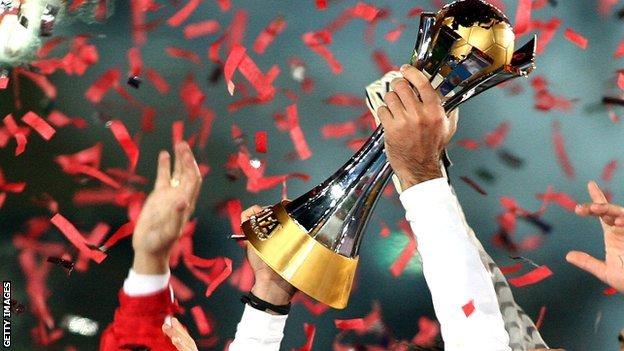 The opening ceremony of the Club World Cup takes place in Japan on Thursday, with the champions of all six Fifa confederations competing - from Uefa Champions League giants Chelsea to Oceania's amateur league Auckland City.

Chelsea qualified for the tournament after winning in Europe in May and will bid to succeed Barcelona as champions.

Rafael Benitez's side play a Premier League game on 8 December at Sunderland before travelling to Japan, where they will be away from home for more than a week.

The Blues will face the Mexican side Monterrey or Korean team Ulsan Hyundai in the semi-finals on 13 December.

The 2012 tournament will also feature the implementation of goal-line technology for the first time in a major Fifa competition.

But how does the Club World Cup work and how will Chelsea's temporary absence from domestic games affect their Premier League hopes?

In 2000 a new competition, the Club World Championship, was held in Brazil. It pitched the champions of six continents, plus the 1998 Intercontinental Cup winners and the champions of the host nation, against each other.

"It can have a negative effect because you miss a few games in the Premier League and you have to catch up."

Home side Corinthians won the inaugural event while Manchester United, who had missed that season's FA Cup campaign to participate, fell at the group stages.

The tournament was revised and relaunched in 2005 as Fifa merged the Intercontinental Cup with the former Club World Championship to create the Club World Cup.

The new format eradicated the group stages and cut the number of teams from eight to six - and it has run every year since then.

The 2011 champions were Barcelona, who beat Brazilian side Santos 4-0 in the final in Yokohama with a brace from Lionel Messi.

The previous year Inter Milan triumphed in Abu Dhabi, with Benitez in charge. The 2012 tournament represents the interim Chelsea coach's first opportunity to claim some silverware in his new post at Stamford Bridge.

Chelsea are one of the favourites for the trophy. Two English winners of the Champions League have taken part in past Club World Cups, with Manchester United winning in 2008 and Liverpool runners-up in 2005.

Corinthians are expected to be Chelsea's fiercest rivals for the title. The Brazilians beat Argentine opponents Boca Juniors 3-1 over two legs in June to lift the Copa Libertadores and qualify. Their team is packed with Brazil internationals but their regular front two, Paolo Guerrero and Emerson Sheik, are Peruvian and Qatari respectively.

Ulsan Hyundai, the Asian champions, enter in the quarter-finals and are from South Korea. This will be their first Club World Cup experience, but Monterrey, the North and Central American champions, competed in 2011.

Egyptian outfit Al-Ahly, the African representatives, have participated three times before, a joint record, and made it to the semi-finals in 2006.

Auckland City, the winners of Oceania's premier tournament, have also played in three previous incarnations of the competition. The semi-professionals from New Zealand normally perform in front of domestic crowds of 2,000.

Chelsea will be out of domestic competition for 11 days. In that same period the two Manchester clubs will be involved in three fixtures between them, one of which is the Manchester derby.

Before he lost his job in November, coach Roberto Di Matteo criticised the Football Association for not postponing Chelsea's game at Stadium of Light on 8 December, but the Blues say they are pleased to be competing for the trophy.

Midfielder Oscar told Fifa.com: "It's very important - it gives you the chance to say you're the champions of the world. Barcelona took it very seriously last year and we'll do the same."

Former Liverpool midfielder Dietmar Hamann, who played when the Reds lost 1-0 in the 2005 final to Sao Paulo, warns the tournament could prove burdensome.

"In the end it was a distraction because we were away from home for about 10 days, we had the time difference and we didn't win it. It might not be a distraction if you do win it, but in our case unfortunately it was," he told BBC Sport.

"The competition gives every club in the world a chance to participate. If Chelsea lift the trophy they will be happy."

"New Zealand has an amateur league so our players are not full-time," the 36-year-old told BBC Sport. "We are always excited to take part. The tournament gives every club a chance to perform on the world stage. A lot of players might never get to perform at that level.

"In 2006 we played and beat the African champions, and for a team from Oceania to beat the champions of Africa was something very special. They were great results for New Zealand and Oceania football. It was an incredible tournament.

"If Chelsea lift the trophy they will be happy. Yes, they will miss a few domestic games, but that's the set-up that's been put together.

"Every other team in the world would appreciate the chance to be able to go to the tournament. As a player, you want to be able to look back and say you lifted the Club World Cup."

The competition starts on Thursday 6 December with Sanfrecce Hiroshima taking on Auckland.

The winners of that fixture entertain Al-Ahly. At this quarter-final stage, two other sides join the competition: Ulsan Hyundai and Monterrey.

Chelsea enter as semi-finalists and will play just two games. In the last four they will face the side that prevailed in that second quarter-final. The other major team, Corinthians, enter at this stage too and play either Al-Ahly or a team from the earlier rounds if they make it that far.

There is a fifth-place play-off on 12 December that will not involve Chelsea, then a play-off for third place and the final itself on the same day, 16 December, at Yokohama.

The 2012 Club World Cup is being played at two stadiums - the International Stadium, or Nissan Stadium, in Yokohama and Toyota Stadium.

Toyota can hold 45,000 spectators and is a football-specific stadium with a retractable roof. J League side Nagoya Grampus play there, the club with whom Gary Lineker finished his playing career in 1994.

International Stadium is where the major matches will take place and has the highest seating capacity (72,327) of any stadium in Japan. It hosted four matches in the 2002 World Cup, including Brazil's 2-0 victory over Germany in the final.

The weather in Japan in December is not unlike that in Britain. It will be cold, thanks to winds blowing from Siberia, and snow may even be an issue.