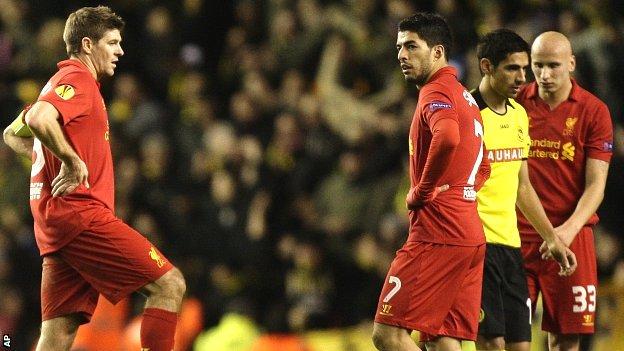 Liverpool's hopes of making the Europa League last 32 will be decided in the final round of games after they let in a late equaliser against Young Boys.

With Udinese failing to win at group-leaders Anzhi Makhachkala, Liverpool knew a win would send them through.

Jonjo Shelvey nodded home to open the scoring before Raul Bobadilla levelled with a superb strike across Pepe Reina.

Joe Cole looked to have won it with a low finish, but Elsad Zverotic struck in the 88th minute to silence Anfield.

If Liverpool beat Udinese away on 6 December they are through to the knockout stage, but defeat would see them eliminated.

A draw would leave them sweating on the result of Anzhi's trip to Young Boys on the same day.

The Reds will kick themselves for conceding at the death and boss Brendan Rodgers is now likely to take a stronger squad to Italy than he might have planned.

Rodgers again experimented with a much-changed side for the visit of Young Boys, and for so long it seemed to have paid off.

In the absence of a recognised striker - top scorer Luis Suarez was left on the bench - Shelvey, Cole and Suso were all handed greater responsibility and they responded with enterprising displays.

It was actually Young Boys who settled quickest and almost scored from kick-off as Gonzalo Zarate put a bicycle kick over the bar.

But Liverpool were beginning to probe, Cole and Jordan Henderson going close, and the momentum shifted when Young Boys centre-back Dusan Vaskovac went off with a hamstring problem.

The Serbian was replaced by Juhani Ojala and that seemed to disrupt his side's flow, allowing the hosts to gain control of the match.

Henderson was denied by Marco Wolfli after being sent clean through by Shelvey's clever flick, and Shelvey then opened the scoring with a simple header following neat link-up play between Cole and Suso.

By this point captain Steven Gerrard had replaced the injured Andre Wisdom and Liverpool were playing the pass-and-move football that Rodgers demands from his teams.

Suso's drive was deflected wide, Nuzzolo cleared a Martin Skrtel effort off the line and Suso shot off target from Cole's pass.

Perhaps Liverpool's only regret was a failure to capitalise on their dominance by extending the advantage before half-time.

Reina into the history book

Pepe Reina made his 81st European appearance for Liverpool on Thursday. That saw the Spanish international pass Ray Clemence's club record for a goalkeeper

It was particularly galling for Liverpool given Cole had wasted a glorious chance after being released by Suso moments earlier.

However, they were swiftly back in the ascendancy, thanks largely to the improved balance that came with the introduction of Suarez.

The Uruguayan immediately began to trouble the Young Boys defence and when he constructed a slick move with Gerrard and Stewart Downing, Cole was able avenge his earlier miss.

Running on to Gerrard's threaded ball, the 31-year-old spun and beat Wolfli with a low strike - his first Reds goal since 23 April 2011.

But Liverpool could not kill off the game and they were made to pay when Zverotic rifled an unstoppable effort through Reina's hands.

"It is a little frustrating. It is disappointing that with three or four minutes to go we didn't control the game better.

"It would have been a good win for us against a good team. But we still control our destiny. It just makes it a wee bit harder than we would have liked.

"It's a competition we want to qualify in. We had a good chance tonight but we didn't close it out."