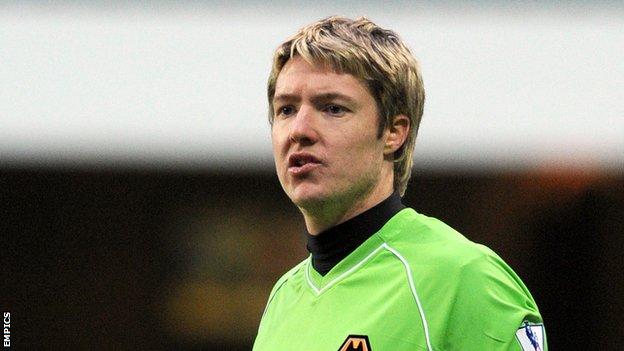 Wolves keeper Wayne Hennessey will miss the rest of the season after undergoing a second operation to repair cruciate ligament damage in a knee.

The 25-year-old Wales stopper has been out of action since April and Wolves goalkeeping coach Pat Mountain said he suffered the setback during training.

"It's the second serious injury on the same part of the body, he'll be looking to the start of the following season."

Former Wales Under-21 keeper Mountain added: "He's had to have surgery to repair the cruciate ligament, a similar operation to what he had to have the first time."

Hennessey had played in three reserve team games without mishap but tweaked his knee while doing some routine goalkeeping training.

"It wasn't even the heaviest of sessions that we do," Mountain told Wolves website."He has done far more physical work since he came back.

"He just felt something wasn't right with the knee and it suddenly felt sore so he went straight in to be checked out.

"When the scan results were known on Tuesday everyone concerned was just gutted for him but we will all be there to help him get straight back on the road to recovery."

Speaking before the second operation, Hennessey said he was trying to concentrate on his recovery and not dwelling on his bad luck.

"It was just one of those freak things that can happen and it's no use dwelling on it," he said.

"Nothing is going to change things. So I'm just concentrating on getting fit again - I've done it once and I'll do it again."

The setback is likely to mean that Carl Ikeme, who has played in every league game for Wolves so far this campaign, will remain in goal for the foreseeable future.

Hennessey, who has won 38 caps for Wales since making his debut in 2007, said: "It's hard because the lads in physio couldn't have done more for me, I've trained hard and there were no problems in the reserve games that I played in."

Wolves head of medical Phil Hayward told the club website: "Of all of the players to have had such a surgery, Wayne has to have been one of the least likely to sustain a re-injury.

"His application over the last seven months has been exceptional and this was demonstrated by the fact he returned to play with such a strong and well controlled knee."