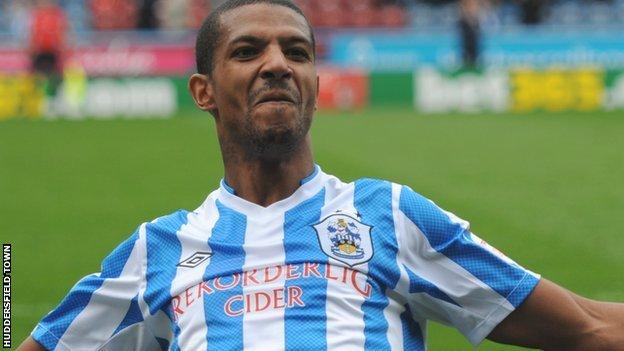 Huddersfield chairman Dean Hoyle has said the club would like to keep striker Jermaine Beckford until the end of the season at least.

The 28-year-old has scored three goals in six games since joining the Terriers on loan from Leicester until January.

"I think Jermaine's view is he'd probably like to stay with us for the season and hopefully that can be arranged," Hoyle told BBC Radio Leeds.

"He loves it here and gets on very well with Simon Grayson."

Hoyle continued: "Jermaine is a fantastic character. Before I met him I thought he had a bit of an attitude but since I met him, he's been a cracking guy. We'd like him to be around longer term but ultimately it's Leicester's call."

Beckford joined the Terriers after Jordan Rhodes was sold to Blackburn Rovers on transfer deadline day.

The Town chairman admitted to being stunned by the exit of the Scotland international.

"When Jordan went it killed us to be honest," he continued.

"I never thought that anyone would come in and pay £8 million for him and the timing of the deal was an absolute nightmare in terms of getting a replacement."

Meanwhile, Hoyle confirmed the club would be taking no further action against on-loan Wolves winger Adam Hammill until after he is sentenced in court on 20 November.

On Monday, the 24-year-old pleaded guilty to assaulting a paramedic in Liverpool city centre while on a night out.