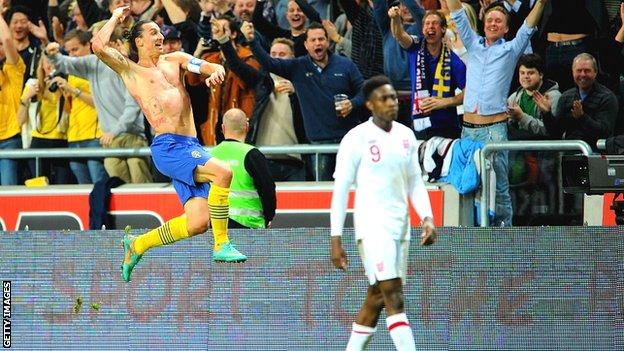 Zlatan Ibrahimovic scored four goals - including an amazing overhead kick - as Sweden marked the opening of their new stadium with victory over England.

The Paris Saint-Germain striker poked home to open the scoring before Danny Welbeck volleyed an equaliser.

Steven Caulker, one of six England debutants, prodded his team in front but Ibrahimovic smashed a leveller.

The 31-year-old drilled in a low free-kick before completing the win with a stunning bicycle kick from 30 yards.

It was a wondrous strike that combined magnificent technique with unerring accuracy, even drawing applause from the away fans.

Ibrahimovic's virtuoso display provided an emphatic response to those who claim he flatters to deceive on the big stage.

The 6ft 5ins forward stole the show on a night that would otherwise have belonged to England's raft of new players and Steven Gerrard on his 100th international appearance.

Caulker, Leon Osman and Raheem Sterling all won their first caps from the start, while Ryan Shawcross, Carl Jenkinson and Wilfried Zaha were introduced as substitutes.

Jack Wilshere, meanwhile, came off the bench to make his first international appearance since June 2011.

But none of them could help England to a first win in Stockholm since 1937 as Roy Hodgson suffered only his second loss in 12 matches.

Former Bolton midfielder Fabrice Muamba: He might be arrogant but Zlatan Ibrahimovic is a problem to any team he play against.

Marseille midfielder Joey Barton: If only the English FA could have given Ibrahimovic a cap or a run out before those pesky Swedes nabbed him...

Tottenham winger Aaron Lennon: Buzzing for Caulks and Huddz, also congratulations to Stevie G on 100 caps #legend, but what a performance by #Ibrahimovic

Revered for his time as a manager in Sweden, Hodgson received a warm welcome inside the new 50,000-seat Friends Arena.

Unfortunately the pitch was not so pleasant and prevented either side from attempting to employ a slick brand of passing football.

The grass was grown on the border between the Netherlands and Germany and brought to the stadium last Thursday by 24 lorries, which will take it all back later this week.

While it disrupted the early stages as players spent longer replacing divots than touching the ball, England created the first chance of note when Osman drew a low save from Andreas Isaksson.

Gary Cahill almost connected with Gerrard's free-kick, but the visitors could not capitalise on their momentum and were punished.

Martin Olsson robbed Sterling of possession and exchanged passes with Mathias Ranegie before crossing from the left.

Ibrahimovic's initial shot was blocked by Caulker but the striker reacted quickest to stab a fine finish high past Joe Hart.

That finally brought some noise from the quiet home crowd under the stadium's closed roof, and Sweden should have doubled their advantage when Ranegie fired over following a collision between Hart and Cahill.

It was a miss that proved crucial because, four minutes later, Young turned Sebastian Larsson and crossed for Welbeck to volley his fifth goal from as many shots on target in his international career.

The Tottenham centre-back then helped ensure England took their lead into half-time with a vital deflection that sent Ibrahimovic's goalbound shot over the bar.

Hodgson resisted the opportunity to make changes at the break and the decision paid off as his team began to dominate.

However, they could not halt the home side's flow and 36-year-old substitute Anders Svensson chipped a delightful pass for Ibrahimovic to control with his chest and expertly volley past Hart.

The Manchester City goalkeeper looked uncertain all night and will have been unhappy to see Ibrahimovic's skidding free-kick from distance settle into the bottom corner of the post he was covering.

Zaha, the 20-year-old Crystal Palace winger, entered the fray but could do nothing as Ibrahimovic scored his wonderful fourth.

Hart headed clear from just outside his area and the ball fell towards Ibrahimovic, who looped a world-class finish into the net.

To compound England's woes, they dropped to second in their 2014 World Cup qualifying group after Montenegro beat San Marino.