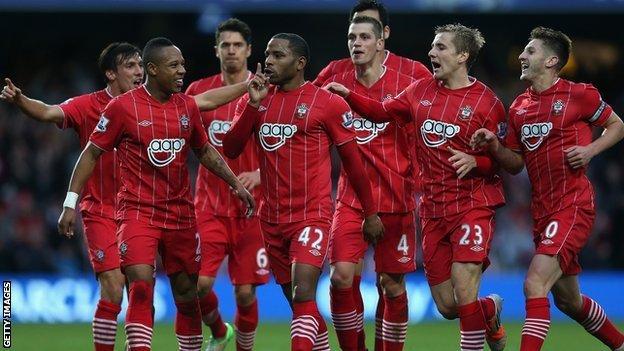 Hughes and his opposite number Nigel Adkins were under such scrutiny before kick-off that this meeting of the Premier League strugglers was dubbed "El Sackico" on the basis that the loser would be lucky to keep his job.

And while Saints boss Adkins took the acclaim of the 3,000 travelling supporters at the final whistle, Hughes - whose side remain without a league win and are five points adrift - was subjected to the full fury of the QPR fans.

Rickie Lambert and Jason Puncheon put Southampton in control at half-time and even though Junior Hoilett pulled a goal back for QPR, Anton Ferdinand's late own goal gave Adkins his first away points of the season and an outstanding victory.

Hughes has been singing a familiar refrain throughout QPR's wretched start to the season, claiming performances have not reaped the rewards they deserved. But that was not the case this time.

QPR were dismal and their supporters vented their feelings, chanting for Hughes's dismissal. One group of fans asked for the appointment of former Tottenham manager Harry Redknapp by brandishing a banner reading: "Harry Come and Save Us".

Owner Tony Fernandes has constantly delivered public support for Hughes but this was a performance and situation that will have tested even his patience.

"That's a huge result for Southampton and fully deserved - apart from a spell in the second half they were the better side throughout. What does the future now hold for QPR manager Mark Hughes?"

Adkins, however, can bask in a superb Southampton show that was a mirror of his own positive, confident approach.

His team's game plan was exemplified in the opening moments when Adam Lallana volleyed just over and Puncheon's angled cross bounced away to safety with QPR keeper Julio Cesar beaten.

QPR's threat was fleeting, with Adel Taarabt weaving his way to force a save from Paulo Gazzaniga, who was then fortunate when he fumbled Hoilett's shot just wide.

The goal which Saints deserved came after 23 minutes when Lambert dived bravely among flying boots in the six-yard area to head in after Puncheon's shot had been turned away by Jose Bosingwa.

QPR's supporters were becoming increasingly agitated and the atmosphere was soon even more hostile moments before half-time when Puncheon cut in from the right and fired a low 25-yard shot beyond Cesar.

It was the signal for a furious reaction around Loftus Road as referee Mike Dean ended the half for Hughes and his men.

The manager responded by sending on Jamie Mackie at the break and a sense of urgency was rewarded after 49 minutes when Hoilett flicked Taarabt's cross over Gazzaniga, who had looked the weak link in Saints' performance.

The goal gave QPR impetus but Southampton were still dangerous. Puncheon dragged a good chance wide from Lambert's knockdown and was then unfortunate to see a superb angled effort on the turn from 25 yards fly inches wide.

Puncheon was in the mood to shoot on sight and another effort was turned away for a corner by Cesar as Southampton continued to play to their attacking strengths.

While QPR's performance had improved marginally after the break - it could hardly have got worse - the Saints were still pressing for a third goal and Cesar again had to save well from Maya Yoshida's acrobatic attempt.

Southampton's victory was sealed seven minutes from time when Morgan Schneiderlin, given too much time and space to cross following a corner, sent in a low centre which was deflected into his own net at the near post by Ferdinand.