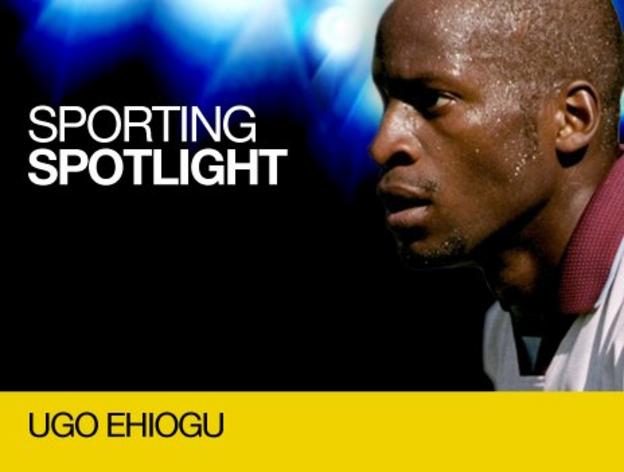 Former Aston Villa, Middlesbrough and England defender Ugo Ehiogu tells us about Big Sam getting in his face, the dentist's chair and almost joining Manchester United.

What are you up to now?

I played for Wembley FC in this year's FA Cup but I am 100% retired now. I coach the under-16s part-time at Spurs, I've got a couple of businesses which keep me busy and do some mentoring with young players. I play a couple of games of golf when I can.

What sort of advice do you give to the youngsters you are mentoring?

I try to teach them about the mental side of the game. A lot of young players aren't getting in the first team, they don't understand why and they don't always react well to what managers are saying. At that age I wish I had some help.

Do young players earn too much?

If they have to sign for Barnet or a Dagenham they take a massive wage cut, and it's a big transition. It's just a shame that they get so much before they've even done anything.

When I joined Aston Villa at 18, I was on £300 a week, and I got a £7,000 signing-on fee. It was a lot more than my peers were earning, I was lucky. I was also lucky that my dad had always drummed into me to look after my money which served me well.

You played alongside Paul McGrath at the start of your career. Did you have any idea he was struggling with a drink problem?

I never knew he had problems with drink when I was playing with him. Paul McGrath didn't really talk much during games, he was very quiet and gentle, you never saw him angry or upset and he led by example. Some of the things he could do made me say 'wow'. It's not until you look back that you realise how lucky I was to play with him. I learned a lot from him.

You went on the infamous tour of China with England before Euro 96. Did you go in the dentist's chair?

It was a memorable time. It was a great tour and I remember the dentist's chair!

It was three feet away from me, I just couldn't see how you could pour alcohol straight down your throat like that. But they showed me. It was a great experience.

The team spirit in that squad was superb, we all went out together. The bonding was as good as I've seen. Gazza was the main man but there were big characters everywhere - Alan Shearer, Teddy Sheringham, Dave Seaman - we were blessed with five or six top players and top characters.

How close did you come to making the final Euro 96 squad?

Terry Venables was very up front with me. Tony Adams was struggling with an injury so Tel said to me that he was taking me to China and if Tony didn't make it I would be drafted in.

I made my debut in China which didn't make Villa chairman Doug Ellis happy because he had to pay me extra wages! I missed out in the end but it was a superb experience.

Gazza was always clowning about. He likened me to Frank Bruno on the plane once and the whole squad were in hysterics. I just wanted to grab him by the neck but he had me laughing too - he had that effect on everyone. You just couldn't help but laugh at him.

You didn't play again for England for nearly five years until Sven Goran-Eriksson picked you for his first game. You scored against Spain - what happened next?

Yeah we beat Spain 3-0 - how times have moved on! They have won everything since then, where did it all go wrong? I suffered a succession of injuries, had to pull out of a few squads and never really kicked on.

I was in the squad for the Greece game when David Beckham scored that goal to qualify for the World Cup. I was there or thereabouts, I thought I had a chance of going to the World Cup in Japan but I pulled my hamstring in the 2002 FA Cup semi-final and that was that. You can cry about it. I'd have loved to have gone but it wasn't meant to be.

How did you find Sven?

Sven was very different. He didn't really get involved a lot, he was more of an observer. He didn't come to the fore until matchday, 20 minutes before kick-off. He has been criticised about that, certainly a lot of England managers in the past would have done a lot more in the build up to games but that was his style and he had success with it.

Who was your favourite manager you worked under?

Big Ron was more hands-on. He was a proper man-manager; very dry and sarcastic and a pleasure to play for. We had some really good times, we also had some volatile times as well. He would go for players at times if he thought they weren't giving it everything but he was the most influential manager of my career. He gave me my debut at 17, not many managers would do that and he had real faith in me.

Who was the scariest manager you had?

Sam Allardyce gave me the biggest telling off. He was my reserve team manager at West Brom right at the start of my career and ripped me a new earhole.

I was always taught to try and pass the ball and play from centre-back and he ripped into me. He did not want me fannying about, he called it. That made me grow up quickly. He was in my face, spit was flying everywhere but you couldn't wipe it off, he would have taken me down, he is a big man.

But I've had a laugh and a joke with him about it many times over the years whenever I see him - I've got a lot of time for Big Sam.

I scored an overhead kick winner for Rangers at Celtic once - honestly! That was well up there. Winning my first medal for Villa in the 1996 League Cup final would be up there. That was my first taste of a really, really big game.

You spent a year at Rangers. Did you have an inkling that they were in financial trouble?

When I was there in 2007 there were rumblings of trouble. We had players leaving to go to Blackpool, teams like that who, with all due respect, are not as big a club as Rangers. But they could offer more of a salary, so that started to make me think this isn't right. It's sad to see it go the way it has.

I never had any trouble with wages or anything, it was always handled well. But going to a club like that we didn't even discuss a contract really. It was just, 'do you want to play for Rangers?' When Walter Smith is on the phone asking you that the answer is always yes. We sorted out money once I was up there.

Who is the best player you played with?

Simple - Dwight Yorke. He had unbelievable ability, hunger, and desire. He is a little bit underrated probably. He could score goals with his head, he could play up front on his own. He could play in midfield, and he always played with a smile on his face. He just had natural ability.

And the best you played against?

Gabriel Batistuta. I only played against him for 60 minutes in a pre-season game for Villa against Fiorentina but I was applauding him. I've never seen so much movement and clinical finishing. He was absolute quality. In England it would have to be Thierry Henry. For four years he was unplayable. Boro lost 7-0 at Highbury once and he was ridiculous - but I'd like to point out I wasn't playing in that game!

What's the worst spelling you've ever seen of your name?

I used to be called something different at every away game. It would be pronounced in all sorts of ways and it always got the biggest cheer. It used to wind me up. It's not the hardest name to get right. Then an old friend who used to work for the BBC phoned up and complained. After that people seemed to get the gist of it.

I should have left Villa a bit earlier. I'd gone stale there. I had a few talks with Manchester City, Spurs and Manchester United about moving, just before they won the treble in 1999.

It came off the back of Dwight Yorke and Mark Bosnich going there. There was some interest but Villa made it difficult for me. I was held to ransom a bit. I'd signed a new contract and they were going to decide which club I could join. They wanted me to go to Middlesbrough so that's how it went.

Would you have joined United?

I'd have hitched a lift there.