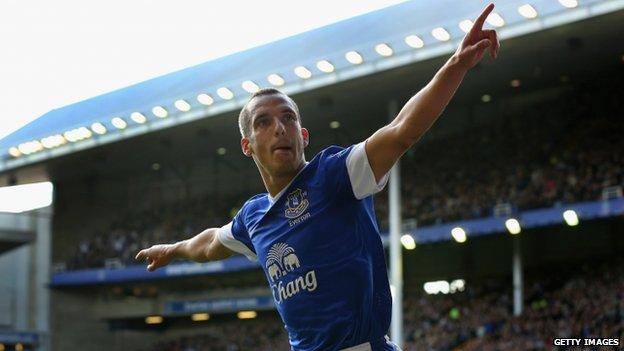 Leon Osman knows all about keeping under the radar.

On the pitch he likes to arrive undetected in the penalty area. Away from it, he lives a quiet, family life outside the Merseyside goldfish bowl.

It has been a long journey from Everton trainee to England international, but in an era when Premier League managers despair at pampered wannabes who emerge from youth academies with outsized egos and an exaggerated sense of entitlement, 31-year-old Osman is a welcome throwback.

Much of his work goes unnoticed. Sharp in the tackle and swift with the ball, the Everton midfielder is a vastly underrated passer, while his goal return overshadows many more celebrated opponents. His stats bear out his brilliance as an all-rounder - there are very few weaknesses in the Osman armoury.

No player has appeared on more Everton team-sheets under David Moyes. And as someone who never gives anything less than total commitment and consistently adds up to more than the sum of his parts, perhaps no player better embodies the ethos of his manager.

Osman will join Steven Gerrard in the England squad. Both grew up in Huyton. Both were born within a year of each other. One chose red the other blue. While Liverpool and England captain Gerrard will win his 100th cap against Sweden on Wednesday, Osman is simply hoping to win his first.

Though he is eligible through his father to represent either Turkey or Cyprus, he only ever wanted to play for England.

In recent months, Osman's belief that he would earn a full England cap - to add to his schoolboy appearances - appeared to be wavering.

Speaking in September, he admitted it had not been easy to be passed over by a succession of England managers.

"I wouldn't say I have accepted getting called up for England is going to elude me," Osman said.

"It is what it is. I am an Everton player and try and give my best for them and if I was to ever get called up then that would be great.

"As you start to get 30-plus the chances start to diminish but as an English lad you still keep going for your club and if it ever happens that would be great."

"This is great recognition for Leon. He has played consistently very, very well for Everton for a long time," Reid, who only made his England debut at 29, told BBC Sport.

"He is one of those players who is, dare I say it, underrated. He just gets on with the job and does everything very well. He doesn't make headlines but when he is not there you really miss him. It is a fantastic opportunity for him and that is all you can ask for."

Few will dispute that Osman deserves this call-up but time is now against him. Hodgson is keen to build the England midfield round the blossoming talents of Jack Wilshere and Tom Cleverley. Osman is a player in that mould but having gained that elusive international recognition he faces an equally tough battle to hang around.

"England have a lot of very talented young midfield players and I am delighted to see Jack Wilshere back in the squad because I think he is an outstanding prospect," Reid added.

"But if Leon gets a chance he won't let anyone down. Nothing fazes him, he keeps the ball really well and he has a goal in him. He is a tribute to David Moyes."

News of the call-up came as no surprise to those at Goodison Park when the Everton manager announced it to the rest of the squad at training on Thursday morning. For almost a decade, Osman has been part of the furniture at Everton, a cornerstone of the club's attempts to challenge for silverware.

Osman is not the type to get carried away. Those at Finch Farm, Everton's training ground, said he took the news with a smile but no fanfare on Thursday. Nothing changed. As always his head went down when the whistle went and dreams of England caps were forgotten.

Wilshere's return may take the headlines once again but that is the way Osman likes it, just under the radar.