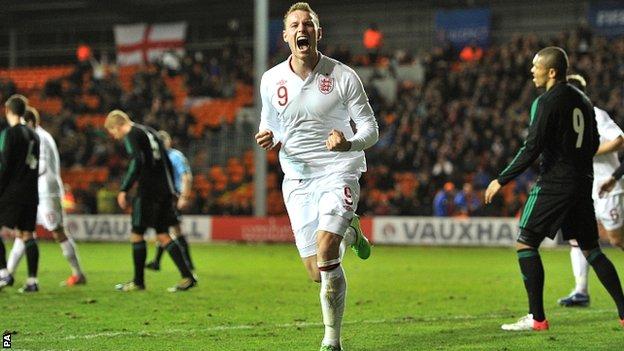 England started their preparations for next summer's U21 European Championships with a comfortable win over Northern Ireland.

England finally doubled their lead midway through the second half through Benik Afobe's penalty.

Northern Ireland offered little in attack, Josh Magennis wasting their only real chance in the first half.

They controlled the game from early on, with Nick Powell's flicked header forcing visiting keeper Conor Devlin into his first save inside 10 minutes. That was to be the pattern of the game.

Wickham and Andros Townsend both had chances to break the deadlock early on before Sunderland striker Wickham smashed against the bar.

He was denied again on the half-hour mark - this time by Devlin. Henderson's lofted pass found him free in the box but he was foiled by the onrushing Devlin.

Northern Ireland had their one and only chance to score just before Wickham broke the deadlock. Lee Hodson found Josh Magennis in the box but the Aberdeen striker spurned the chance to give the visitors a surprise lead as he was caught in possession.

And how it cost them moments later. Former Ipswich man Wickham finally found a way past the Cliftonville keeper in first-half stoppage time, powering home a header at the near post from Henderson's free-kick.

It was more of the same after the interval but England struggled to find their shooting boots with Powell and Wickham both firing wide.

A raft of changes midway through the second half slowed the pace of the game but not England's intent to score more.

Playing in front of his home fans, Blackpool's Tom Ince was inspired. Drifting from left to right, Ince jinked his way through a crowd of Northern Ireland defenders only to be denied by Devlin.

It took a rare Devlin mistake to let England double their lead. The keeper brought down Afobe in the penalty area and the striker coolly slotted home the resulting spot kick.