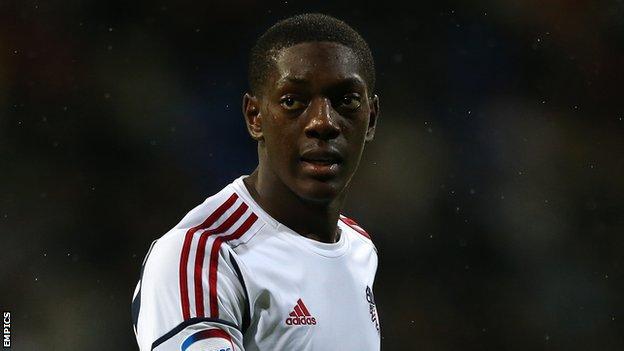 Sordell said he had been racially abused during Wanderers' defeat at the New Den on 6 October.

Millwall said they would exclude the teenager for "the foreseeable future" but would not impose a life ban.

He has instead been offered a place on a club educational programme "in the hope that we can change his outlook on equality, racism and life".

The south London club confirmed the boy had written a letter of apology to Sordell, which the England Under-21 international had accepted.

Millwall added: "It is our hope that all of us within football, including governing bodies, clubs, players, fans and the media can continue to work together to build on the progress that has been made over many years in effectively tackling the issue of racism in our game."

The 21-year-old former Watford striker, who was part of the Great Britain football squad at London 2012, was an unused substitute in the Championship match which Millwall won 2-1.

A Bolton spokesman added: "Following the conclusion of the investigation, Bolton Wanderers would like to thank the FA and Millwall for their co-operation and assistance in responding to the events at The Den.

"Marvin Sordell would like to thank the FA, the PFA and Kick it Out for their support, and Millwall for the way in which they dealt with this."

A statement by the Football Association applauded Millwall and Bolton "for their commitment and cooperation in ensuring a full and thorough investigation could take place".

It added: "We would also like to thank Marvin Sordell and the PFA for their assistance throughout this process.

"The FA fully supports Millwall's approach in terms of dealing with the young individual responsible through a ban from the club's matches for the foreseeable future as well as offering him a place on one of its education programmes, run by Millwall for All."