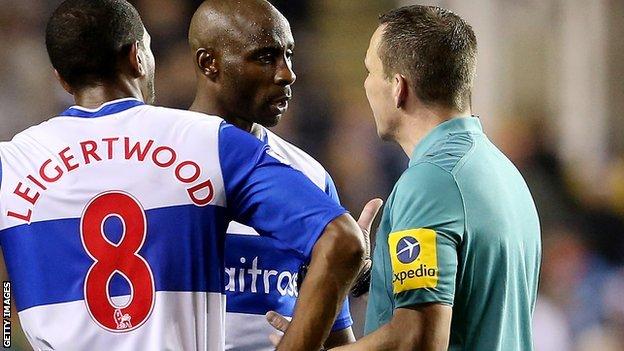 Football officials were once again in the spotlight during Tuesday's memorable Capital One tie between Reading and Arsenal.

With the Royals winning 4-3 as the 90 minutes drew to a close, the fourth official signalled that at least four minutes of stoppage time would be played.

"Obviously it doesn't help that the referee added two minutes onto the four minutes of injury time to make it six. You can't tell the time as wrong as that, but he did," said the disgruntled home manager Brian McDermott.

Who are the PGMO?

So what are the rules about stoppage time?

The Professional Game Match Officials - the board responsible for providing the Premier League with officials and developing refereeing - provided BBC Sport with some answers.

How do referees keep track of how long an injury takes?

There's two people, one of the assistants and the fourth official. As soon as the physio or trainer comes on, they will monitor how long they are on the pitch.

Does he stop his watch or just note what time the injury has happened?

He doesn't stop his watch, no. It's just a case of monitoring their watch; they never stop the watch.

Is 30 seconds added on for each substitution?

As a rule of thumb, yes. But if a player is doddering, meandering, then extra time can be added. And it's the same for red cards, yellow cards as well.

Is the clock stopped for goals?

No, it's not. But they do add time (to cover celebrations). It's around 30 seconds as a rule of thumb, unless they spend five minutes celebrating. Every situation is different, they'll take each one on its merit.

That's discretionary. It has to depend on the situation.

When does he let the fourth official know how long he wants added on?

It's usually about two minutes before the end of each half.

How does he keep track of the amount of added time in injury time itself?

That's the same process itself. For example in the Reading-Arsenal game there was a substitution in extra time.

Do referees not blow for full-time when a team is attacking?

No. They can blow for full time at any junction.

What have been the major changes in the process over recent years?

Just that fourth officials note down every stoppage of play. They can present it to the management team of any club - should they want a list.

How long have fourth officials been noting the times down?

It's actually since last season. They've been writing it down properly so that people can see this is the list of where the time has been added on.

How much has it helped ease potential tensions with managers?

There aren't any. I mean the communications between match officials and both players and managers are much improved. The manager and the captain go in and exchange team sheets with the referee beforehand. We removed the monitor in the dugout a few years ago (and) the behaviour in the technical area has improved remarkably. Credit needs to go to the managers and players.

Sir Alex Ferguson is among managers that have repeatedly called for the responsibility of timekeeping to be taken away from referees. Has this ever been discussed?

It has. It is something that has been discussed at the PGMO technical committee, which meets quarterly to discuss and potentially suggest to Fifa any changes in the laws of the game.

It would be an International Football Association Association Board (Ifab) decision for that to be introduced. If it was to be introduced by a third party, whether that's a fourth official or somebody up in the stands, Fifa would need to make that decision and if there was a particularly strong request for that, PGMO technical committee could suggest that too.

On the PGMO technical committee are the bodies responsible for organising the game in this country - the LMA, the PFA; there's club representatives on there. They can suggest to Fifa 'We would like this to be put to Ifab'.

Ifab don't have to put that on their agenda or if they do put it on the agenda, they don't have to vote for it as well, but they can make suggestions. It's something that has been up for debate before. The LMA, as Sir Alex is part of, if they feel very strongly about that, they can work with the technical committee to see if that can be put on Ifab's remit.

But if you are going to put that on Ifab you would need to have data which suggests this would improve the match time-keeping by x%. You'd need to provide them with some evidence it is a worthwhile thing to do.