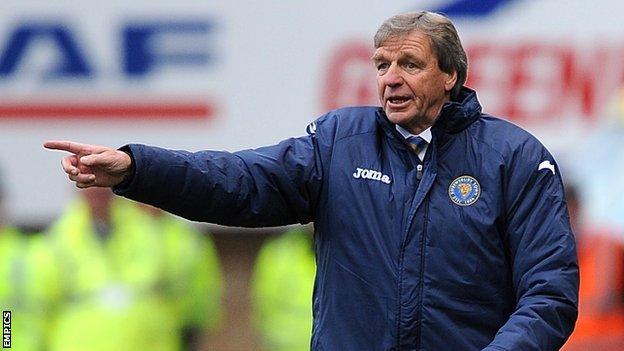 After 15 years at Hereford United as owner, chairman and manager, Graham Turner should have good reason for looking forward to returning to Edgar Street in the FA Cup with Shrewsbury Town.

Instead he will make the trip down the A49 saddened by the state the club he left two and a half years ago is in.

The 65-year-old left for a second spell as manager of Shrewsbury with the Bulls a mid-table League Two side.

Now he will go back with Hereford 14th in the Blue Square Bet Premier, facing administration because of a £120,000 tax bill and unable to pay their players on time last week.

Around £45,000 of that debt relates to a VAT bill dating back to 2008-09, when Turner was in charge, following an audit of the club going back four years.

1997: Is unable to prevent the Bulls being relegated to the Conference.

1998: Purchases the majority shareholding in the club in partnership with Joan Fennessy and takes over as chairman from Peter Hill.

2001-02: Hands over first-team management duties to player-coach Phil Robinson to concentrate on securing the club's financial future. Takes over again at the end of the season after Robinson's contract was not renewed.

2006: Leads Hereford to promotion back to the Football League after finishing second in the Conference and beating Halifax in the play-off final.

2008: Leads Hereford to automatic promotion to League One.

2009: The Bulls are relegated back to League Two after only one season in the third tier. Turner steps down as manager and, as chairman, appoints John Trewick as his successor.

2010: Finishes the 2009-10 season as manager after sacking Trewick. Announces his intention to sell his shares in the Edgar Street club and leaves the Bulls to become manager of Shrewsbury for a second time. In October, he is awarded the freedom of the city of Hereford.

But Turner is adamant that Hereford were in good condition when he left the club, with in excess of £450,000 in the bank and with money from the sales of Toumani Diagouraga to Peterborough, Marc Pugh to Bournemouth and Mathieu Manset to Reading to come in.

"I take great exception to the implication that we have been responsible for the £45,000 VAT debt there but that's just a drop in the ocean to the problems that are at the club at the moment," Turner told BBC Radio Shropshire.

"I still have friends who are Hereford United supporters and I do feel sorry for them because they are so anxious about the football club.

"When I've gone back there in the two games we've played and to watch football I've been very well received.

"The vast majority of fair minded people at Hereford United know over a 15-year period the job that Joan Fennessy and I did in keeping the club alive.

"I can walk through the door for this FA Cup tie with my head held high, look anybody in the eye and say we left this club in very good condition.

"I'm pleased with the contribution I made to that football club and I feel it is a crying shame, and it upsets me a bit, to see it in the state it's in at the moment. I just hope somehow it can survive but I just fear the worst at the moment."

During Turner's time at Edgar Street, Hereford went from the lows of being relegated to the Conference to the highs of an unlikely promotion to League One.

But in all that time, current chairman David Keyte claims the club was carrying a £1m debt - a debt Turner says the club needed to work with rather than pay off in cash.

Keyte told BBC Hereford & Worcester he did not accuse Turner of financial mismanagement, but said he would have looked after the books in a different way.

Now the club is in serious financial difficulty it is difficult to accept that I am being vilified for debts that we left and that is the reason why they are in trouble. That's far from the truth

"In financial terms Graham left £450,000 in the bank account but there was and has been for a number of years a debt of over £1m over the club," said Keyte.

"There are two different approaches to the financial side of the club; whether you operate on a week-to-week cash basis and ignore the long-term debt, or, as is my approach, to try and get hold of the company, which is a significant difference.

"Hereford United 1939 Ltd is a company which had a debt of over £1m, which did not have the leases to the ground due to that debt to another body.

"My approach when entering into it was not to just carry on from three o'clock to three o'clock every Saturday and just football only, it was to try and pick up the company and take it forward for the longer-term good of Hereford United.

"The company books were negative because of the long-term debt that nobody had made any inroads into. That was a strategic decision of the previous management. That was their choice. They effectively left the debt on one side.

"My approach was to try and get hold of the company and steer its own destiny, but you can't do that if somebody else holds the leases to the ground that you play on.

"We have used the cash to buy back the leases for the longer-term progress of the club. At this time, two and a bit years later, we have not had the clear opportunity to develop the football ground where I can assure you the £450,000 that went into buying the leases would be a small figure compared to what we get in return."

Over 3,000 tickets have been sold for Saturday's tie, which will provide a welcome boost to the Edgar Street coffers given average gates have been well below 2,000 this season.

But Turner is hopeful the Bulls' current problems do not sour his relationship with the club.

"I had 15 years at Hereford, put a lot of time and effort into the football club and I felt it was time to leave," he added.

"The supporters were becoming a little bit restless about how we had done. We had been relegated from League One and were probably halfway up League Two in my final year I was there.

"For the first few months after I left the club I was vilified and criticised mainly because I came up the A49.

"After the first initial moans and groans it went quiet for 12 months. Now the club is in serious financial difficulty it is difficult to accept that I am being vilified for debts that we left and that is the reason why they are in trouble. That's far from the truth."