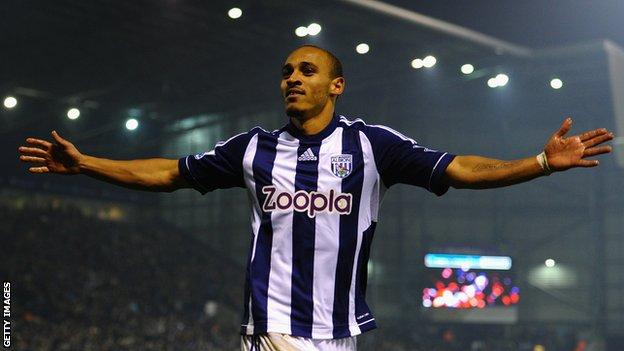 Odemwingie opened the scoring with a shot from outside the box towards the end of the first half.

Rickie Lambert struck the bar just after the break, before Odemwingie rounded off a fine West Brom counter by heading beyond Paulo Gazzaniga.

West Brom have enjoyed their best start to a season for decades, but two successive defeats might have given Southampton hope they had caught Steve Clarke's side at the right time.

The Saints, wary of the need to start picking up points quickly, were immediately probing for an opening and it was they who had the first attempt on target, but Lambert's low drive from the right of the box was saved well by Ben Foster.

For all of Southampton's good build-up play they were almost punished for a lack of concentration in defence after 20 minutes. Odemwingie hit a low effort that was going wide until Zoltan Gera stuck out a boot, but the Hungarian succeeded only in diverting the ball over the bar from six yards.

Southampton did not lessen their attacking intent despite that scare and had a chance just before the half hour when Gaston Ramirez smartly clipped the ball into the middle of the area for Lambert, but the striker directed his header straight at Ben Foster.

Immediately afterwards the visitors were issued a warning about their defensive frailties when Odemwingie embarked on a swift counter and, with defenders failing to close him down, he drove a shot just wide of the post.

It was a warning that Southampton did not heed as the hosts opened the scoring nine minutes before the break. Youssouf Mulumbu found himself in acres of space down the right before playing a pass to Odemwingie who, with plenty of space ahead of him, drove a shot goalwards and the ball took a slight deflection off Maya Yoshida on its way into the net.

Lambert struck the woodwork soon after the restart after a fortuitous deflection from Gareth McAuley's attempted clearance rebounded to the striker inside the area, but his sidefooted effort hit the bar.

There was little Southampton could do, though, when West Brom scored a second on the hour.

Liam Ridgewell played a pinpoint ball from defence to Shane Long on the left flank and the Republic of Ireland international curled a perfect cross into the area as Odemwingie raced to power a header beyond Gazzaniga.

That effectively ended the game as a contest but West Brom came close to scoring again with just over 10 minutes remaining, when substitute Romelu Lukaku lofted the ball across the area for the onrushing Chris Brunt, but his volleyed effort flew wide of the far post.

There was just time for Southampton to almost snatch a late consolation but Foster did well to race off his line and stop Adam Lallana's poked effort as West Brom recorded a fifth win in six home games.

West Brom manager Steve Clarke said: "Our performance was perhaps not as good as it has been but we controlled the game and we got the win we wanted.

"It's been a good start and it is not for me to take the credit. The players have been fantastic. They have got the reward for that.

"We said from the start that our primary objective was to make sure that Albion are playing in the Premier League next season."