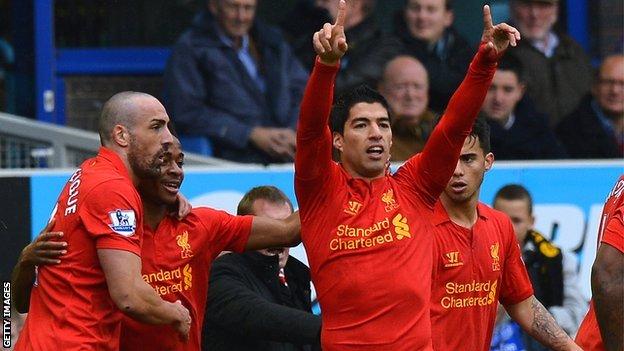 As he sat down and attempted to explain how his mind works, what drives him and what makes him one of the world's most controversial footballers, one quote stuck in the memory.

"There are two of me," he said. "Two different people."

It was a rare insight to a man who is rarely out of the spotlight.

At Goodison Park on Sunday, both Dr Jekyll and Mr Hyde were on show.

For the opening 20 minutes, Suarez was at his brilliant best: balanced, brave, technical and powerful. Every time he surged forward he caused the Everton defence problems. His low shot created the first goal, his deft header was responsible for the second.

And yet Hyde replaced Jekyll for much of the next 70 minutes until the Liverpool striker popped up in the final minute to score what should have been a late winner, denied only by an incorrectly raised assistant referee's flag.

One red corner of the famous old ground sang his name and hailed him as their hero. He responded with a wave and basked in the adulation.

The blue half Merseyside felt rather differently.

For 90 minutes he had attracted scorn, hatred and abuse from the home support. They called him a cheat, a diver, a disgrace to the game. Objects were thrown in his direction. Gestures were made every time he walked towards the touchline.

Scapegoat or scoundrel? Not since the days of Eric Cantona has English football been so divided over such a gifted footballer. Once again the controversy threatened to overshadow the brilliance.

All the headlines after the game will be about Suarez, as they had been before. In the run-up to the game, Everton manager David Moyes described him as someone with a habit of diving.

Suarez's response was a theatrical swallow dive in front of the dugout as he celebrated Liverpool's first goal.

World Cup 2010 - handles on the line to deny a Ghana a late winner. Uruguay go on on to reach semis on penalties

"If we'd have scored a third I probably would have done the same to him," Moyes said after the game. "But you've got to be careful what you do. He's going to have to dive in front of a lot of managers now, isn't he?"

Moyes said Suarez should have been given a red card for a challenge on Sylvain Distin. Rodgers disagreed. This is a player few agree on.

Liverpool fans' love affair with Suarez remains as intense as ever, but the Uruguayan is a man the rest of football loves to hate.

For all his undoubted talent, Suarez is at risk of becoming English football's most controversial figure, in an era when there are more than a few contenders.

Suarez was no stranger to controversy before he arrived in England; in the Netherlands he was known as 'The Cannibal' after biting PSV Eindhoven's Otman Bakkal, and was described as the most hated man in Africa after his apparently cynical handball denied Ghana a goal in a World Cup quarter-final.

Arnold Muhren, who coached him at Ajax, has said Suarez is not averse to buying penalties - but added that he has never seen a more dedicated player. Staff at Liverpool describe Suarez as "smiley", "quiet" and "professional".

When he steps on to the pitch he becomes a confrontational, win-at-all-costs striker who, by his own admission, would sell his grandmother for a goal. But that comes at a price.

He is a player who niggles and snaps at your heels, the kind no-one likes to play against. Few fans, whoever they support, would question his talent but many believe it is in danger of being forgotten under a barrage of abuse and damning headlines.

His ban for racially insulting Patrice Evra has been served and he has the same right to a fresh start as any other rehabilitated offender.

His diving has been singled out, but officials now struggle to tell when he has been fouled, often meaning he misses out on goal-scoring opportunities.

In the eyes of many, Suarez is now a villain and struggling to escape that label.

Somehow he and his manager must learn how to preserve the irrepressible competitive instinct, while combining it with a cooler, less emotional approach that may ultimately spare him the kind of abuse that can wear a player down and drive him away. Let's hope it doesn't come to that.