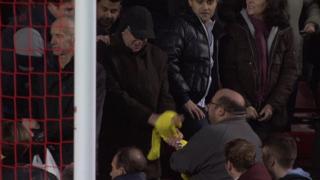 Tottenham fans argue over who will keep goalkeeper Brad Friedel's shirt following the 2-1 win over Southampton at St Mary's stadium.

Gareth Bale scored Spurs' opener and Clint Dempsey doubled their lead before Jay Rodriguez reduced the deficit in the second half.

Tottenham held on to claim the win that lifted them to fourth in the Premier League, after which Friedel threw his shirt into the crowd.