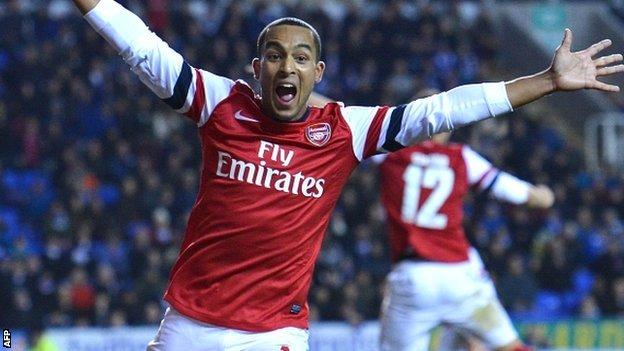 Theo Walcott scored a scintillating hat-trick as Arsenal produced one of the great comebacks to take their place in the last eight of the League Cup.

Walcott found the net before the break and in injury time, while Olivier Giroud and Koscielny also struck.

Into the history books

Marouane Chamakh scored in extra-time before Pavel Pogrebnyak levelled, but Walcott and Chamakh had the final word.

It was an extraordinary cup tie, the archetypal game of two halves. Reading were magnificent for 44 and a half minutes before Walcott scored his first goal to give the Gunners hope.

And yet somehow Arsene Wenger's side produced a scarcely believable comeback to recover from three goals down for the first time in their history and take their place in the quarter-finals for the 10th successive season.

They created for themselves an utter disaster and somehow rose to find hope, and with it, power, purpose and direction.

When they were trailing 4-0 Saturday's Premier League trip to Old Trafford, the scene of last season's 8-2 humbling at the hands of Manchester United, looked a daunting prospect but now this result has the hallmarks of a turning point.

That it was left to Chamakh, starting his first Arsenal match since January, to score two crucial goals made it all the more incredible.

At the club's annual general meeting last week, Wenger had made it clear the League Cup was fifth on his list of priorities and during the first half his players appeared to have taken those words a little too literally.

Arsenal made 11 changes but that did not excuse the naivety with which Carl Jenkinson, Johan Djourou, Koscielny and Ignasi Miquel defended before half-time.

The Reading onslaught began in the 11th minute when Hunt, midway inside the Arsenal half, swept the ball wide to Hal Robson-Kanu on the left flank and his delightful low cross was thumped into the net by Roberts, who left Koscielny, his marker, all too easily.

Six minutes later, Reading were two up as Chris Gunter's low cross deflected off Koscielny's leg and beyond Arsenal goalkeeper Damian Martinez at the near post.

Arsenal led 3-0 inside 10 minutes at St James' Park and 4-0 at half-time but were pegged back with Cheick Tiote's stunning late volley capping the comeback.

Liverpool were down and out after going into half-time 3-0 down but scored three times in six minutes to turn the game on its head.

Spurs were 3-0 ahead at half-time before Joey Barton was sent off. But somehow City fought back and Jon Macken scored a dramatic late winner.

Again Spurs went in at half-time 3-0 ahead but were ripped apart in the second half by a breathtaking United performance.

Bolton had led 3-1 and, were still leading with three minutes to go until Stan Mortensen and Bill Perry struck.

The full house at the Madejski could scarcely believe its eyes as Leigertwood fired in from the edge of the area, thanks in large part to an awful error by Martinez.

The travelling support had seen enough. Chants of "we want our Arsenal back" rang round the stadium and the response was immediate, Walcott reducing the arrears in first-half stoppage time as he raced on to Andrey Arshavin's through ball before lifting his shot over Reading goalkeeper Adam Federici.

Walcott raced forward time after time following the break, and the England winger drove in a corner which Giroud headed beyond Federici to make it 4-2.

With a minute left the hosts looked to have done their job, only for an unmarked Koscielny to head in Walcott's corner, and five minutes into injury time Walcott levelled the scores with a shot which crossed the line despite the desperate attempts of Nicky Shorey to keep it out.

Jenkinson stabbed the ball home seconds later but the goal was given to Walcott.

The momentum felt irreversible in extra time and Chamakh fired a low shot through the legs of Kaspars Gorkss to put Arsenal ahead for the first time, but with Reading fans heading for the exits the game burst into life once more.

Pogrebnyak headed beyond Martinez to level the scores again but the drama was still not over.

Walcott crashed home from eight yards to put Arsenal back in front and as Reading crumbled, Chamakh completed a famous victory with a lob that floated up and over Federici to finally decide an incredible football match.