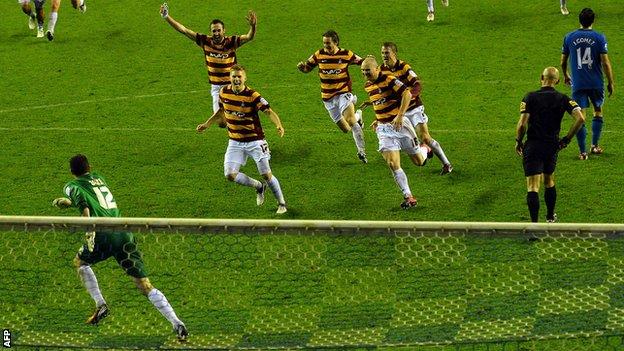 League Two side Bradford City reached the quarter-finals of the Capital One Cup with a dramatic 4-2 penalty shoot-out victory over Wigan Athletic.

After a goalless 120 minutes, Wigan's Shaun Maloney fired over from the spot and Matt Duke saved from Jordi Gomez.

Bradford defended heroically but Wigan will rue a number of missed chances.

Gomez went closest to winning it with two first-half volleys and fired wide with the best chance of the game in the second half of extra-time.

Bradford showed no nerves in the shoot-out with Nathan Doyle, Gary Jones, Stephen Darby and Alan Connell all confidently converting their penalties.

But after David Jones and Ben Watson had scored Wigan's first two penalties, Maloney missed and Gomez's kick was saved to send Bradford through to their first League Cup quarter-final in 24 years.

Wigan's Roberto Martinez made nine changes from the side that won for the first time in seven Premier League games against West Ham on Saturday with goalkeeper Ali Al-Habsi and defender Ivan Ramis the only players to keep their place in the starting line-up.

Rolling back the years

Bradford last knocked out a Premier League club from the League Cup in September 1995, when they beat Nottingham Forest over two legs in the second round.

Ramis, who scored a spectacular opener in the 2-1 win over the Hammers, had the ball in the net inside the opening 10 minutes, but the stand-in skipper's header from Gomez's drilled free-kick was ruled offside.

Gomez then dissected the Bradford defence with a delightful pass to Mauro Boselli but he dithered and keeper Duke smothered the ball as the Argentine striker tried to take it around him.

The elegant Spaniard was at the centre of everything good for Wigan and was the closest to a first half opener with two delightful volleys.

The first, in the 16th minute, was inches was over the bar while the second, on the stroke of half-time, was spectacularly tipped over by Duke.

Wigan's frustration grew as the game wore on and their composed passing game started to unravel.

Bradford's 5,000-strong following had to wait to until 15 minutes before the end of normal time to see Al-Habsi tested when Zavon Hines sprinted half the length of the pitch before unleashing a shot that was blocked by the Omani international.

But the fans cheered every tackle and clearance as they doggedly survived into extra time.

Substitutes Jean Beasejour and Maloney brought some composure back to Wigan and forced the visitors to defend with 11 men behind the ball at times.

But Boselli was wasteful in front of goal, sending two close range headers off target, before Gomez shot wide in the 115th minute with just Duke to beat to set up the thrilling finale.

Wigan manager Roberto Martinez: "I never felt that we lost concentration or allowed Bradford to have a big say in the game.

"I think we controlled it really well, and we were very unfortunate not to convert any of the chances.

"That was why it was a feeling of frustration more than anything."

Bradford manager Phil Parkinson: "I thought it was a night of great discipline by the team. There were a lot of big hearts out there.

"Wigan give you problems that are ones we don't normally come up against in League Two, in terms of the movement of the team and their shape.

"If you play with commitment, desire and discipline like we did tonight you do get rewarded and I am really pleased with the way we played.

"In terms of finance first of all, it is huge for the club, because there isn't a great deal of money at Bradford.

"But if we can get a good draw now, that is going to really help us for the rest of this season and going into next season."