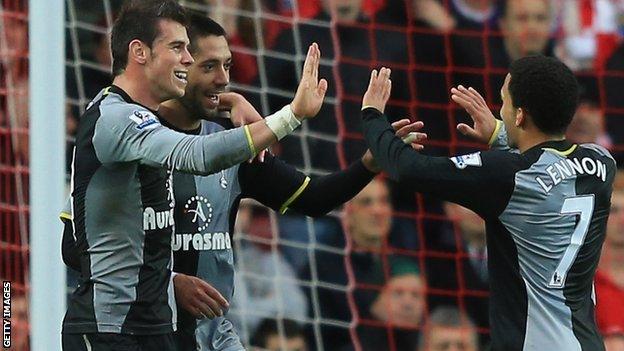 Tottenham Hotspur survived a Southampton fightback to go fourth in the Premier League.

In a one-sided first half, Spurs coasted to a 2-0 lead thanks to Gareth Bale's bouncing header and Clint Dempsey bundling over the line.

But Saints improved after half-time and got back in the game when Jay Rodriguez finished from a tight angle.

Rodriguez and the recalled Rickie Lambert had chances to equalise, but Spurs held on.

The prospect of anything other than a Tottenham win - their first in five visits to St Mary's - looked non-existent at the end of a first period when Southampton's defensive limitations were all too evident.

But, after managing a first shot on Brad Friedel's goal shortly after the interval, the hosts were transformed, creating problems for a Spurs defence that had previously enjoyed a comfortable afternoon.

It was still a shock when Rodriguez pulled a goal back for Nigel Adkins's side.

Maya Yoshida was somehow denied on the Spurs goalline by William Gallas and, from the resulting corner, Rodriguez's flick was well saved by Friedel, before the former Burnley man put away the rebound via the post.

Rodriguez fired wide and Lambert was blocked by Gallas as Saints got on top in the period that followed, but Andre Villas-Boas's side held on to collect three points and bounce back from last week's defeat by Chelsea.

In contrast, Adkins is left to reflect on Saints' seventh defeat of the season, one created by the poor defending that has characterised their return to the Premier League.

Southampton had conceded 24 goals in their opening eight games - the most in the top flight since Wolves in 1963 - and they were again ripped apart as Spurs poured forward in the first half.

Finding space down both flanks, particularly with Kyle Walker overlapping Aaron Lennon on the right, the visitors looked dangerous every time they entered the Saints half.

It was a long ball down the Spurs right that created the opening goal, with Jermain Defoe cutting in to find Tom Huddlestone, whose floated cross was met by Bale's downward header, which bounced into the left-hand corner of Artur Boruc's net.

The goal marked Bale's return both to the Tottenham side and to Southampton, the club he left as a 17-year-old in 2007. The Welshman, who missed his side's last two games following the birth of his first child, did not celebrate.

Although Saints kept the ball well they were not troubling an organised Spurs defence and the question seemed to be when, rather than if, Villas-Boas's men would double their lead.

So it proved, as Lennon was able to run unchallenged from deep inside his own half, before playing a defence-splitting ball into the path of Defoe.

The England striker rolled the ball past Boruc, and the retreating Jose Fonte hacked his second attempt at a clearance into Dempsey, with the ball rebounding off the American into the net.

And the visitors would have been out of sight had Defoe not then wasted three chances, all originating from the Spurs right.

On each occasion he failed to find the target when given time and space to shoot, but it looked to be of no consequence until the Southampton resurgence. As it was, Spurs had just done enough.

Tottenham manager Andre Villas-Boas: "It is good for the team to win a difficult game away at Southampton. The first half was extremely good in terms of the football we played. In the second half we had to change the nature of the game, we had to defend much more.

"We're extremely happy for what we did. We played on Thursday and we don't have a lot of players to rotate the squad for all the competitions we want to do well in.

"It's fantastic to see them perform at this level when only a few hours ago we had a game in Slovenia.

"We certainly wanted to get six points from this fixture and the next game against Wigan at home, before we play Manchester City and Arsenal. That week could be important in terms of what we want to do in the league."