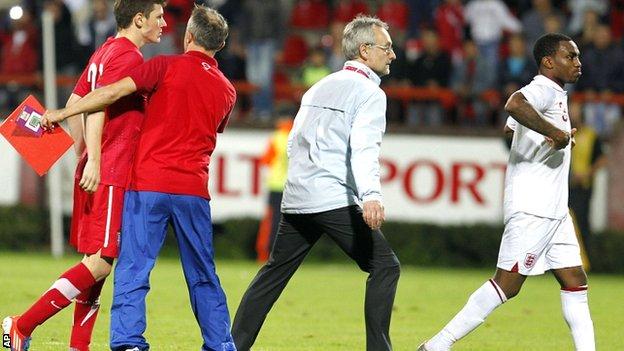 Fifa vice-president Jim Boyce has urged Uefa to consider banning Serbia from future tournaments after ugly scenes at Tuesday's Under-21 game with England.

The Serbian FA has been charged with racist chanting by fans and both associations were charged over the behaviour of their players.

There's got to be very serious action taken, especially against the Serbian FA

Boyce told BBC Radio 5 live: "It needs to be a stadium ban now.

"There may even be a situation where Serbia aren't allowed to play in one of the future competitions."

England defender Danny Rose said he was subjected to racist chants and hit with two stones during the Euro 2013 play-off match in Krusevac, which England won 1-0 for a 2-0 aggregate victory.

Rose was sent off after kicking the ball away at the end of the match and was pushed by Serbia players as he left the pitch, sparking a melee in which England staff jostled with members of the Serbia coaching team.

Boyce added: "This is not the first time that Serbia have had major problems and as someone who completely condemns racism in any shape or form, I think this time Uefa have to act and they have to act very strongly.

"It's come to a stage where to fine people or to give associations large fines, it doesn't seem to work.

"The morons who cause these problems really don't seem to care about money that has to be paid out by clubs or associations.

"There's got to be very serious action taken, especially against the Serbian FA."