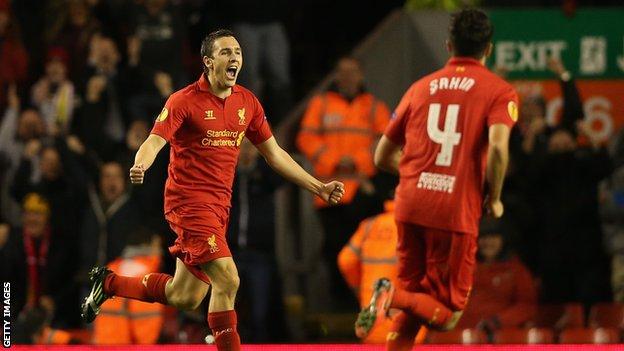 A rare Stewart Downing goal secured Liverpool a Europa League victory over Russian side Anzhi Makhachkala and lifted them to the top of Group A.

Downing cut in from the left after the break and drilled a powerful angled drive past keeper Vladimir Gabulov.

Daniel Agger saw his cheeky attempt to score ruled out after he headed the ball out of the keeper's hand.

The Russians are among the biggest wage-payers in football, with Cameroon international Eto'o reputedly earning £250,000 a week playing for the Dagestan-based side.

But having fielded a side close to his strongest, Rodgers watched them comfortably secure a win that will give them a confidence boost for Sunday's derby clash with Everton.

They were always in control, creating a steady stream of chances throughout. The first of them fell to Jonjo Shelvey but he wasted an opportunity to add to his three goals in the competition.

Luis Suarez got away from defender Joao Carlos to square for the midfielder, only for Shelvey to scoop his right-footed effort over the bar from the edge of the area.

Suarez was involved again as Liverpool opened up the Russians once more, spotting Glen Johnson's rare foray into the box and delivering a clever flicked pass into his path that the left-back failed to make contact with.

Anzhi, with former Blackburn defender Chris Samba at the heart of their defence, came under further pressure as half-time approached.

An off-target Nuri Sahin header and a shot wide from Agger suggested a growing urgency in Liverpool's play.

Agger's defensive partner Martin Sktrel was next to test Gabulov with a shot from distance as the hosts continued to dominate possession.

And it was a surprise when Steven Gerrard passed up a chance to score the opener.

Half-time substitute Raheem Sterling beat Samba in the air to guide the ball to Shelvey on the left, and the latter's first-time cross found Gerrard unmarked but the captain sent his header wide of the near post.

That miss was quickly forgotten however as Downing, having been moved to left-back following the introduction of Sterling, struck in the 53rd minute.

He strode onto a Shelvey pass and used his "wrong" foot to drill the ball across goal and into the far corner of the net.

Suarez went close to adding a second moments later with a fierce drive that flew just past the upright before Agger saw his effort ruled out after he nodded the ball off the keeper's outstretched hand.

Anzhi, who were unbeaten in 13 games coming into this match, had only an Eto'o effort to cheer as the Reds closed out the match in convincing style.