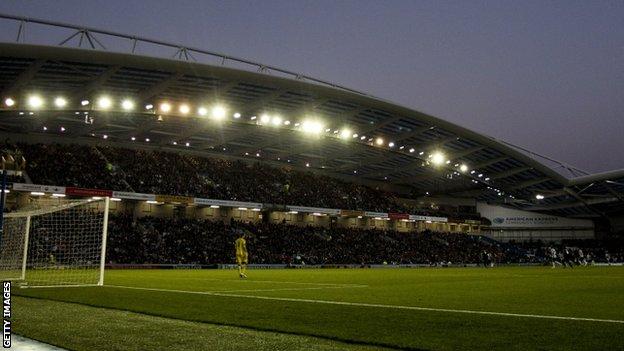 New Brighton chief executive Paul Barber only visited the club's former home at the Withdean Stadium once, but his memories will sound familiar to anyone who did take in a game at the athletics stadium.

"It was cold, wet and windy," Barber told BBC Sport. "I only went there once but I remember every minute of it vividly, which perhaps tells you all you need to know."

It is 15 years since Brighton left their old Goldstone Ground, but after a ground-share with Gillingham and 13 years at the wet and windy Withdean, the Seagulls are back in business.

The club currently boast the highest average attendance in the Championship at their new Amex Stadium home and, despite expanding the capacity during the summer, are already well under way with installing more seats.

All change for the Seagulls

showing the average cost of the cheapest adult ticket in the top four divisions of English football has risen by 11.7% in the past 12 months, and with the Seagulls themselves charging up to £39 for an adult ticket, the club continues to add names to its waiting list for season tickets.

"There was always a huge pent-up demand for supporting the football club in Brighton," Barber said. "But you have to be reasonable to fans and provide value for money.

"We are never going to be the cheapest to come to, but we try and keep the prices in line with the experience we offer. At the end of the day, people will always have a choice where to spend their money, whether they are on a high income or a low income.

"On a Saturday, we want the fans to choose to come here and support the club financially. What we have seen is that people are prepared to do that if you give them quality on and off the pitch."

Fans have flocked to watch Gus Poyet's side since they moved into the Amex last summer, with the club averaging 25,512 in the league so far this season - more than the likes of Derby, Sheffield Wednesday, Leeds and Nottingham Forest.

The capacity is set to reach 30,000 in January and, far from feeling the pinch of the recession, Barber revealed that Brighton have managed to entice thousands of fans to arrive early and stay late for each game - spending more money at the club all the time.

"This is a great place to watch football and we are keen to get people here for the day out," he said.

"We are in the entertainment business and we are trying to give people an all-round package. The majority of fans arrive and depart using public transport, and they recognise that if 30,000 people want to leave the stadium all at once it is going to be difficult.

"The stadium is designed to allow people to hang around after the game, enjoy something to eat, have a few drinks and for the kids to be able to run around and play in the wide concourses.

"We have people staying after the game in their thousands.

"We keep the bars open, we don't have a set closing time. We want people to feel like they can relax and stay at their leisure."

That invitation extends to away supporters, with Brighton lighting the stadium in the colours of the travelling fans and even importing local beers.

Barnsley fans, for example, were greeted by a red concourse and served Webster's Yorkshire bitter on tap before their visit in August, and the Seagulls also take the radical step of bringing together rival fans after the game.

Barber said: "After the game we open up the bars, there's no segregation and they can mingle and mix. You don't have a segregated environment in your living room or your local pub so why should there be one at the stadium?

"We make fans feel comfortable. It tends to mean then that they spend more, they are more respectful to our club staff and fans and, after the game, they are invited to join our supporters for a few drinks and a talk about the game."