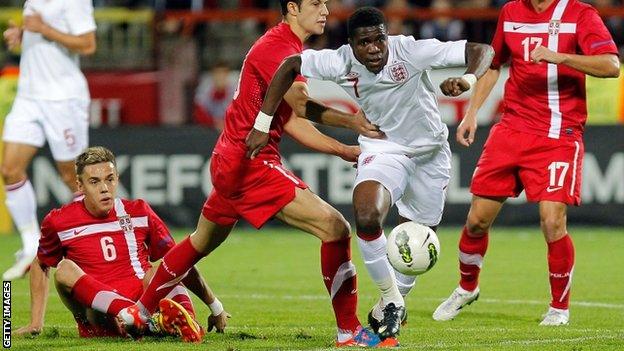 Stuart Pearce's England Under-21 side qualified for Euro 2013 with victory in Serbia but the tie was marred by ugly scenes at the final whistle.

Connor Wickham's 90th-minute winner sparked a series of scuffles between players and staff on both sides as missiles were thrown onto the field.

England's Danny Rose was sent off as the players clashed but seemed to indicate he had been racially abused.

England assistant Steve Wigley was also involved in a fight near the tunnel.

The 2-0 victory takes England Under-21s through to an unprecedented fourth successive major tournament but the night will be remembered not for the football but for the minutes after the final whistle.

England, who led 1-0 after the home leg, had been on the brink of progressing as the game meandered to a 0-0 draw.

And when Serbia committed goalkeeper Branimir Aleksic up the pitch for a last-ditch free-kick, England broke swiftly to score the goal that wrapped up the tie.

Thomas Ince raced down the right flank and cut the ball back to a rampaging Wickham, who turned the ball into an empty net.

Then, as the England players celebrated, a series of objects were thrown on the field as the crowd expressed their frustration.

The final whistle was blown almost immediately but Serbia and England players then clashed, before coaches and even officials on both sides became involved.

A series of monkey chants were heard around the stadium as Rose kicked the ball into the crowd and was shown a red card.

It was an horrible echo of the scenes in 2007 when the Serbian Football Federation were fined £16,000 at the Under-21 European Championships in Holland after their supporters racially abused England's Nedum Onouha.

The Football Association has already reported the latest incident to Uefa.

It was a night when many of Pearce's squad matured as they battled to cope with a partisan home support and a hostile atmosphere.

England goalkeeper Jack Butland appeared to be targeted during the second half as a number of objects were thrown onto the field.

But England stood firm and extended their clean-sheet record beyond the seven-hour mark as they reached next summer's tournament in Israel.

Bolton striker Marvin Sordell was presented with an early opportunity to take the sting out of the tie, but after cutting inside Slobodan Medojevic his fierce shot rattled Serbia goalkeeper Branimir Aleksic's right-hand post.

It was a let-off for Serbia but a moment that woke the home side from their early slumber and they were sharper to the ball and swifter to use it than at any time during Friday's first-leg defeat.

Darko Lazovic was a constant nuisance to England, pulling the strings in midfield, and it was his free-kick that almost led to the opening goal after 23 minutes.

Serbia had the better of the second half but an impressive performance by Butland put England on course for victory.

As the match went into injury time England broke to score through Wickham but the goal will be overshadowed by the events that followed.