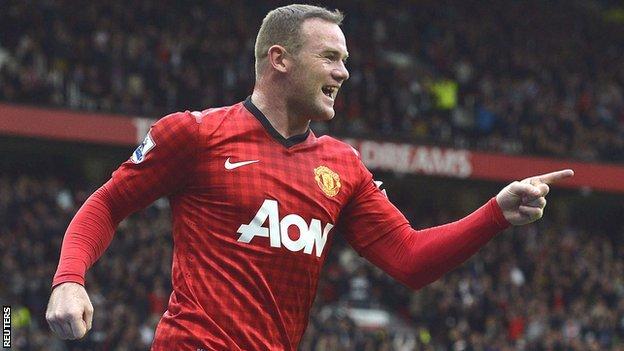 Wayne Rooney recovered from scoring an own goal to strike twice and earn Manchester United victory over Stoke.

In a seesaw game that was in keeping with United's performances this season, Rooney nodded into his own net to give Stoke the lead and then equalised from another header before the break.

Once Robin van Persie and Danny Welbeck were on target to give United the advantage, it looked like it would be a comfortable victory for the hosts.

But there were again question marks about their defence as Michael Kightly ran at Rio Ferdinand to make it 3-2 before Rooney restored a two-goal cushion with a simple finish for his 200th club goal.

The goals were Rooney's first for his club this season, and came after he scored three times for England on international duty with Welbeck also getting his first club goal this term.

And the attacking trio of Rooney, Welbeck and Van Persie once again papered over the cracks as United chalked up their ninth win in 10 games and remain four points behind league leaders Chelsea.

But ahead of the clash between the top two at Stamford Bridge next Sunday, the west Londoners will have watched with interest as Stoke caused problems in the first half during an entertaining game.

United appeared to be in control early on with Paul Scholes, making his 400th Premier League start, seeing plenty of the ball on his return to the side.

But it was the midfielder's foul on Kightly which led to the opener. Ryan Shawcross was lurking but Rooney unwittingly converted Charlie Adam's cross with David De Gea nowhere to be seen.

Adam then almost doubled the lead when he fired in a near-post effort, but De Gea clawed his shot away and for a period Stoke were on top with Walters also going close after a flowing move.

Much of that was down to Adam, who was quick to link up with Peter Crouch and put plenty of pressure on Scholes. It was a familiar picture for the quiet home supporters, at that stage, who have seen their team go behind in seven of 11 games this season.

Ferguson has already admitted this term that the attack is the strongest part of his team, and once they started to find their rhythm and movement, the Potters struggled to contain them.

Welbeck had already shot wide before Rooney got the equaliser, and the England forward's first official Premier League goal of the season was created by a superb fizzing cross from Van Persie.

That led to a sustained spell of pressure with the Dutch striker at its heart, and following decent opportunities for Rooney, Welbeck and Scholes, Van Persie steered in Antonio Valencia's driven cross to give United a half-time lead.

It was no more than the hosts deserved and Stoke were caught napping after the break when they allowed Rooney acres of space to pick out Welbeck.

Jonny Evans, who largely kept Crouch at bay, almost made it 4-1 a minute later, but Asmir Begovic stopped the Northern Irishman's close-range header and it looked at that point as if the hosts would cruise to a comfortable victory.

But that is not how it has worked with United recently, and as Ferdinand backed off, Kightly ran at the hosts' defence to squeeze a shot in.

Fortunately for Ferguson's side, Stoke again switched off and Rooney restored the two goal advantage by tucking in at the back post following a corner just past the hour mark.

It was a relief for the Old Trafford crowd, but Ferguson's side will have to tighten up in defence ahead of next Sunday's clash with Chelsea, who will give them a far greater test.