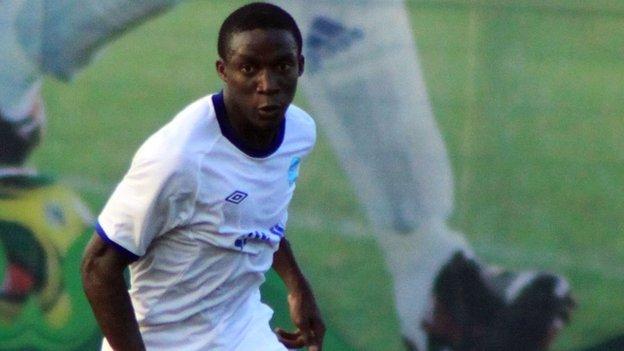 Nigerian-born midfielder Victor Kayode is set to make his international debut for Sierra Leone this Saturday after doubts were removed over his eligibility.

The 25-year-old was first selected by coach Lars Olof Mattsson for the first leg of the Africa Cup of Nations final qualifying round, at home to Tunisia in August.

Questions were then asked by BBC Sport as to how Kayode qualified to represent Sierra Leone, which resulted in him being withdrawn from the squad.

The path, though, has since been cleared for him to make his international bow, as it has emerged that his maternal grandfather was born in Sierra Leone.

Kayode, who was born in Ondo state to Nigerian parents, said: "I expressed joy when I received the good news because my dream has come true.

"In fact I'm lost for words. All I can say now is that I'm looking forward to make my Sierra Leone debut against Tunisia on Saturday if I'm picked by coach Mattsson.

"I have no regret in my decision to play for Sierra Leone and I'll always give out my best for the national team."

Kayode, who plays his club football in Azerbaijan, expressed an interest in playing for Sierra Leone as recently as four months ago.

He was introduced to Mattsson by friend and Leone Stars skipper Ibrahim Kargbo, ahead of World Cup and Nations Cup qualifiers in June.

Mattsson was impressed with his performance in training and - after an earlier set-back - is now able to consider Kayode in his selection plans.

Acting general secretary of the Sierra Leone Football Association (SLFA), Abdul Rahman Swarray, appears to have been a busy man.

It was his intervention which seems to have allowed Kayode to step up for Sierra Leone.

"I got in touch with Fifa about the eligibility of Kayode," Swarray said.

"They told me he can play for Sierra Leone as long as he meets any of the set out criteria.

"As his maternal grandfather was from Sierra Leone, I've told coach Mattsson that he can use the player against Tunisia on Saturday if he wishes."

The second leg with Tunisia is to be played in Monastir. The tie is level at 2-2.