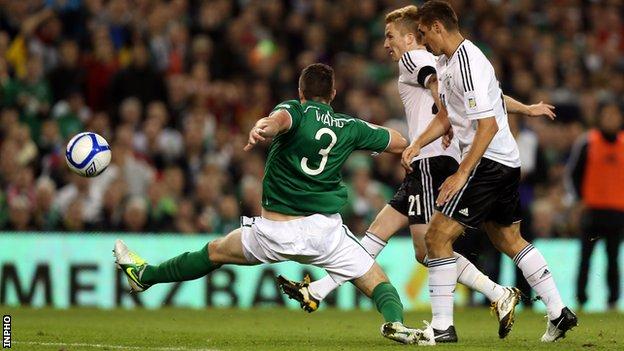 Marco Reus and Toni Kroos scored twice in Dublin as Germany humiliated the Republic of Ireland in the World Cup qualifier in Dublin.

Borussia Dortmund midfielder Reus fired in off the crossbar in the 32nd minute and then drilled in a second just eight minutes later.

Mesut Ozil's penalty made it 3-0 and Miroslav Klose scored the fourth.

It was a miserable night for the Republic and the media critics are likely to show no mercy on manager Giovanni Trapattoni after this display.

The veteran boss, though, has to lift his men as they are away to the Faroe Islands in another qualifier on Tuesday.

Uncharacteristically, the Irish showed little fight against the Germans after the first two goals had gone in, and thousands of the full house had left the Aviva Stadium well before the end.

The Republic had kicked off their Group C campaign with a lucky, last-gasp 2-1 victory away to Kazakhstan. But their luck ran out as they were crushed by the ruthless Germans.

After a quiet start, Germany gained more and more possession.

They could have had a penalty in the 30th minute when John O'Shea seemed to pull back Reus but the German midfielder was booked for diving instead.

However, the goal quickly followed as Reus fired past Westwood right-footed off the underside of the bar.

It took the German footballer of the year just eight minutes to double his tally, this time accepting full-back Jerome Boateng's pass and rifling a classy left-foot shot into the bottom corner.

The contest looked as good as over, but worse was to follow for the home fans.

Darren O'Dea brought down Klose in the box on 54 minutes and Ozil sent Westwood the wrong way from the spot.

It was 4-0 with 58 minutes gone when Klose ran on to Bastian Schweinsteiger's defence-splitting pass and rounded Westwood before rolling the ball into the empty net from a tight angle.

The Republic capitulated again three minutes later when O'Shea's weak clearance fell perfectly for Kroos to help himself with a skidding shot inside the post.

Kroos deepened the wounds with seven minutes remaining, drilling home from 22 yards with the Republic in disarray.

Keogh's goal at the end will have done nothing to lift spirits on a depressing night for the Republic of Ireland.