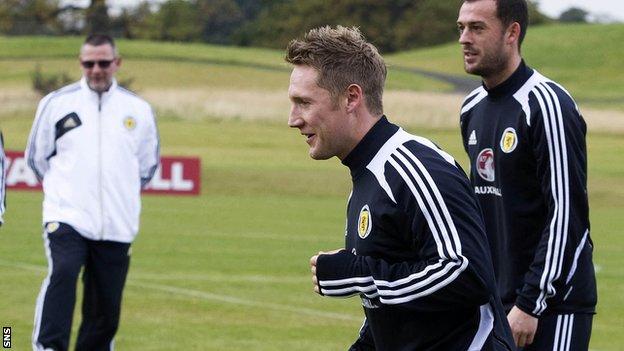 Kris Commons aims to build on his impressive Celtic form to inspire Scotland to a World Cup qualifying victory over Wales.

The midfielder has not featured for Scotland since March 2011 and said this month that he was "baffled" by his absence from Craig Levein's squad.

But he gets his chance following injuries to Robert Snodgrass and Jordan Rhodes and Steven Naismith's ban.

"It's great to be back again," Commons told the Scottish FA website.

"I have been keeping an eye on the squad during the time I have been out and the important thing was to keep playing as well as I could and I knew the opportunity would come. I am now just looking to grab it with both hands.

We need to win against Wales first and then we can see about Belgium after that.

"I am playing with a lot of confidence and that has been reflected in the results we have had at the club, especially in the Champions League.

"Our whole pre-season was set-up to qualify for the Champions League group stages and I think our results and performances so far have given the whole of Scottish football a boost.

"We all want to reach the World Cup finals. It is a huge thing playing against the best players in Europe at club level in the Champions League.

"A lot of the players in the Scotland squad play in England against some of the best players in the world but as a country we all want to compete against the best nations at the World Cup finals, especially this one as it is being played in one of the real homes of football, Brazil."

Scotland are in desperate need of points, having opened their campaign with disappointing home draws against Serbia and Macedonia.

And Commons, 29, believes the Scots can emerge from the away double-header against Wales and Belgium with their qualification prospects enhanced.

"The next two games are really important but it was always going to be a group where countries take points off each other," added the player with nine caps.

"I hope to be given the opportunity to contribute to two huge games.

"We need to win against Wales first and then we can see about Belgium after that.

"After two draws it is important to get a win and the way the group is set up, that could put us right into contention."