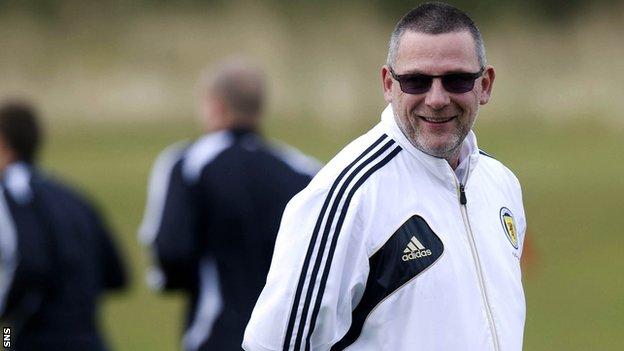 Just how important is Friday's World Cup qualifier in Cardiff?

Is it a must-win for Scotland? The fans say yes. The media say yes.

The coaching staff and players may say something different when faced by the cameras but, behind the doors of their Cardiff headquarters, the answer will be yes as well.

The punishing draws with Serbia and Macedonia last month have left plundering points in Wales and Belgium a necessity.

As soon as the final whistle went at the end of the 1-1 draw with Macedonia, the Tartan Army knew the shortfall would have to be made up on qualification battlegrounds away from home.

Some think that may be a good thing, given there may be less of a burden on the team without a packed Hampden venting their frustration at every loose pass or wayward shot at goal.

However, one man on which the pressure remains piled on is Craig Levein.

Wales are a wounded animal, having been beaten by Belgium in their group opener and savaged by Serbia a few days later.

The manager will be feeling the heat billowing from his collar right now - not that he will convey that in public.

Levein is an intelligent, articulate man and he doesn't need anyone to tell him what he and his team need to do in this double-header, nor the consequences of failure.

Almost exactly three years ago, George Burley took his Scotland squad to the Cardiff City Stadium for a friendly.

His time in the post did not survive it.

Wales are a wounded animal, having been beaten by Belgium in their group opener and savaged by Serbia a few days later.

Dragons' boss Chris Coleman hasn't been in the job for as long as Levein, but he too seems to be walking a tightrope with four defeats from his four games in charge.

That fact may make the hosts more dangerous as they seek redemption against the Scots.

Rightly, a lot of the pre-match focus has been on Gareth Bale.

The Tottenham full-back-turned-winger is the top scorer in their current squad and provided the one chink of Welsh light in the Serbian city of Novi Sad with a superb free-kick.

Bale wasn't around the last time Scotland were in the Valleys, but Aaron Ramsey was.

Only 18 at the time, the Arsenal midfielder ran rings around the Scots, setting up a goal each for David Edwards and Simon Church before saving the best for himself - all before half-time.

Despite having the captaincy ripped from his grasp - that honour now belongs to Swansea's Ashley Williams - Ramsay has rediscovered the form he had before the horrific double leg break sustained against Stoke just a few months after he destroyed Scotland.

Loans at Nottingham Forest and first club Cardiff City helped in his recovery and he is now back in the Gunners' first team and pulling the strings.

The Welsh have been hit harder than Scotland with call-offs.

Craig Bellamy would have been a huge influence on them, but the Cardiff attacker is injured with his international future shrouded in doubt.

Edwards, who plunged the first dagger in Burley's final act as Scots boss, withdrew this week with West Ham defender James Collins a frustrated, suspended spectator on the sidelines.

The one area the Scots will hope to take advantage of is the Welsh defence, which will likely be backed up by Aberdeen goalkeeper Jason Brown.

Brown appears to be on his way out of Pittodrie having become cast adrift from his team-mates.

He hasn't played this season, and is unlikely to unless he finds a new club in January.

Reading's Chris Gunter can play on either flank with skipper Williams certain to start in the middle.

However, Celtic's Adam Matthews will be missing with an ankle injury, further depleting Coleman's defensive options.

The Welsh have not scored a goal from open play in five matches, but that will not fool Levein as there is plenty of threat posed by the Welsh side.

Burley's Scotland lost to a shadow Wales team in 2009 and, whilst not at full strength this time around, so much more rests on its outcome.