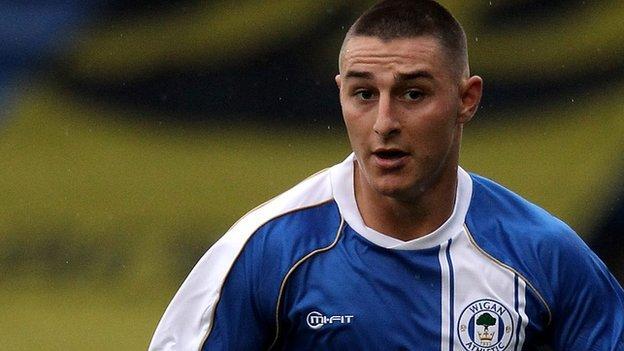 Jordan Mustoe has been praised by assistant manager Kenny McKenna after impressing on his Morecambe debut.

McKenna said the 21-year-old full-back, signed on a month's loan from Wigan just two days earlier, was unlucky to be on the losing side against Preston.

McKenna told BBC Radio Lancashire: "We've watched him four or five times, including last year, and he had a fantastic game."

McKenna also singled out Joe McGee for his efforts in the match.

"You know what you're going to get from Joe, he's a good player and one for the future, and he played ever so well," he said of the 19-year-old midfielder.

Mustoe put the Shrimpers ahead before Preston came back in the second half. Even then Richard Brodie equalised from the penalty spot before two late goals gave the scoreline what McKenna considered to be a flattering gloss for the home team.

"I thought in the first half we controlled the game and played some really good football before deservedly getting ourselves in front," said McKenna.

"We've had two or three good chances to kill the game of in the second half, but our Achilles heel is set-plays at the minute and we conceded again.

"When you're not putting chances away it does add to the pressure on the defence, but we've kept five clean sheets this season, so it might be we lacked a little bit of concentration.

"No matter how many chances you miss you have to keep the back door closed."