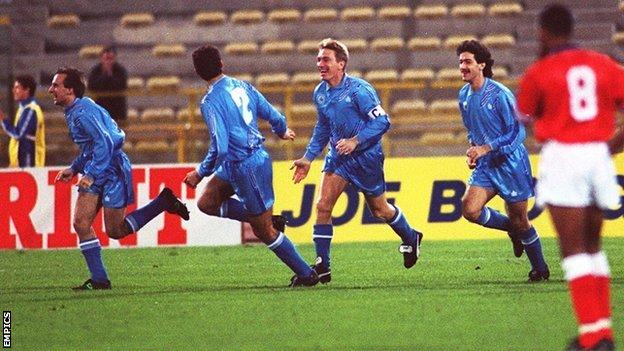 It is almost 19 years since Davide Gualtieri scored the goal that still has people asking him for his autograph - and left Graham Taylor wondering whether his time as England manager really was cursed.

Just 8.3 seconds after San Marino kicked off their World Cup qualifier with England on 17 November 1993, Stuart Pearce's under-hit backpass allowed Gualtieri to nip in and prod the minnows into the most unlikely of leads.

"I will never forget that moment," Gualtieri told BBC Sport. "I had dreamt about it but I never thought it would happen. It was so hard for us to score against anybody, let alone a team as big as England."

"The stage is set for England's last and decisive match in this World Cup qualifying group. England in red, San Marino in blue, England needing to win by a seven-goal margin and hope that Poland can do them a favour in Poznan against Holland. [Whistle sounds to start game.] I'm sure you're aware now what's at stake. And Nicola Bacciocchi the number nine picks the ball up straight away and San Marino launch the first attack, oh and a mistake by Stuart Pearce and San Marino have scored. I don't believe this."

When I spoke to him this week, Taylor could not remember the name of the player who inflicted on him the final ignominy of his time as national manager, but he did not need reminding that the goal remains the fastest scored in a World Cup match - qualifiers or finals.

With for the first meeting between the two nations since, I felt slightly guilty asking Taylor to relive some of the agony it involved - although it clearly hurt him a lot more at the time.

Taylor told me: "When the ball went into the net, I looked up towards the sky and just said quietly to myself 'god, please tell me what I have done wrong'.

"I can laugh about it now because that is a true story. Normally I would accept responsibility for every result, and every goal but, I mean, we were eight seconds into the game. I knew we would go on and win but you think to yourself 'what the hell is happening here?'

"His name hasn't stuck in my memory but I can picture the goal as I'm talking to you now. I can see Stuart and David Seaman and the San Marino player slipping in and putting it into the net. I can see it happening, but I still can't stop it!

"Good luck to the guy, though. I wish him well."

England went on to win 7-1 in what was Taylor's last game in charge, with Ian Wright scoring four goals. But it was a hollow victory.

To reach USA '94, England had been left needing to win their final game of a calamitous campaign by seven goals and hope Poland beat the Netherlands. The score at half-time in Poznan was 1-1 but Dennis Bergkamp put the Dutch ahead before the hour mark and Ronald de Boer's late goal extinguished all hope.

Back in Bologna's Stadio Renato Dall'Ara, where San Marino played their home games, England were by now well on their way to a one-sided victory but the mood was bleak.

"Nearly everyone in the ground was following what was going on in Holland's match," Taylor added. "In fact, it was difficult to stop people telling you what was happening.

"So there wasn't any enjoyment to be had from our game. We had beaten San Marino 6-0 at Wembley so we put 13 goals past them in total but we had still only done what people expected and, of course, we knew the Dutch had won too so we were out no matter how many we scored.

When San Marino won a game...

"It was a very hard trip and one of the worst aspects of it was that we flew back to Luton Airport and had to fight our way through the press and photographers.

"We had no security and no-one to meet us and we had to get our luggage and fight our way to our cars on our own. You wouldn't have that now - it's a completely different world.

"I was pushing against the photographers who were deliberately getting in the way of the trolley in the hope I would stop, but I kept pushing. I think I caught a few shins that day but, to tell you the truth, I was quite happy to because cameras were being shoved pretty much into my face."

Taylor resigned six days later. Things were turning out rather more happily for Gualtieri, meanwhile, who got Pearce's shirt as a souvenir at the final whistle but did not speak to any of the England players because "they were all a bit angry".

Gualtieri did not find out his goal was a world record until journalists told him after the game, and he did not realise he had made the front page of several British newspapers until he was sent a copy of the Daily Mirror, with the headline "End of the world" and his picture on it.

He has had plenty of attention since then, too, including more than 270,000 views of his goal on YouTube. Gualtieri, who also owns a video of the game, last watched it about six months ago but he is expecting it to get plenty more viewings this week.

Now 41 and a computer salesman in San Marino with a lot less hair than he had in 1993, he does not speak any English but, with his wife Caterina translating, I asked him how he became aware of what turned out to be an enduring fame - and a particular popularity with Scotland supporters.

Tales that Scottish fans paid for his drinks on a night out when they came over for a European Championship qualifier against San Marino a couple of years later turned out to be an invention, but Gualtieri's brother did benefit from some Caledonian hospitality.

"Over here, nobody really knew what was going on but in England there was a big fuss," Gualtieri explained.

"Even now, some fans from around the world are always coming into my shop with pictures of me and shirts for me to sign.

"And, when my brother went to Scotland on holiday, they found out who he was and bought him drinks and a meal too. But that was my brother, not me."

When I ask him which player he used to compare himself to, Gualtieri describes himself with a laugh as "a poor man's Roberto Baggio". But, despite only ever being a part-time player, he is a full-time member of footballing folklore, and will stay that way even if his record is eventually broken.