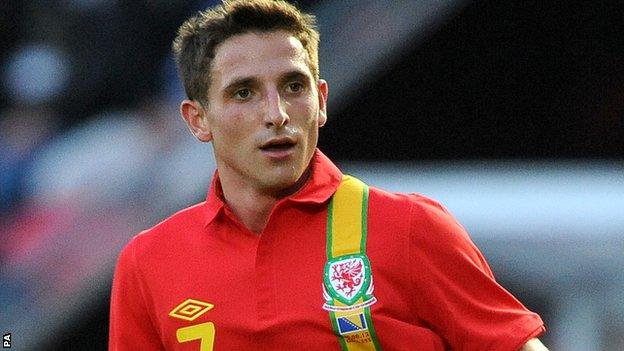 Joe Allen says Wales' players are determined to make up for their poor start in the World Cup qualifiers against Scotland and Croatia.

Wales lost 2-0 at home to Belgium in their opening match before being thrashed 6-1 in Serbia in September.

Chris Coleman's side host Scotland at Cardiff City Stadium on Friday before they travel to Croatia on Tuesday.

"We have to make sure we set the record straight in these two games coming up," midfielder Allen said.

Manager Coleman came under fire following the Serbia defeat and the former Fulham boss admits the pressure is on him to reignite the qualifying campaign.

Coleman has lost all four games he has taken charge of the national side and Wales are bottom of Group A following two defeats.

Allen, Wales' newly crowned player of the year, says the players must shoulder responsibility for their poor start and at they are fully behind Coleman.

"As players we need to shoulder the responsibility of our performances and make sure we get to the standards that we know we can.

"We all know it wasn't quite good enough on the night. There are certain games in football where things don't happen for whatever reason.

"Sometimes it's difficult to put a finger on what exactly that was."

The 22-year-old says Wales's preparations for Friday's match are no different in the wake of the heavy 6-1 defeat in Novi Sad in September.

"Our approach to the game is the same as any other. We want to win every football match," the Liverpool midfielder.

"Realistically you can't win every football match but preparations as always are spot on here.

"We set out in a way that's perfect for us and we're looking forward to bouncing back after the disappointment of two defeats with a victory on Friday."

And Allen, who joined Liverpool in August, believes former Swansea team-mate Williams is an excellent choice as skipper.

"I had the privilege working alongside him as captain at Swansea," Allen said. "He'll take on that role with full responsibility.

"You'll obviously have to ask Aaron on how he feels about it but he seems fine.

"He's come into this camp the same as ever looking forward to performing on Friday and obviously against Croatia away.

"Nothing will change from that point of view."